A Hot Jedi Night: Star Wars For Her 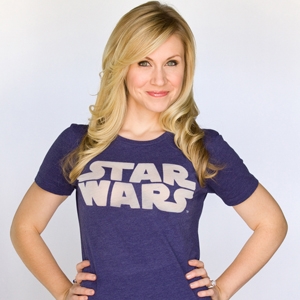 Not only is Ashley Eckstein a real-life hottie (that’s her there on the left), she’s also a Jedi in training. As the voice of Ahsoka Tano in the Clone Wars cartoons, Ashley spent lots of time at conventions. There, she realized female fans got as much love as a Wookie in the Galactic Senate. Now, she’s engaging the fashion galaxy with all the voracity of a Rebel trench-run. Skeptical? Check out ‘Daddy’s Little Girl’ or ‘I Know’ tee designs and tell us you wouldn’t drool like a Hutt if your lady showed up to movie night wearing one. Now’s your chance to win big points with your lady. Hit us up on Facebook to win her a HerUniverse tee!So is Ashley a real fan? At first she “was more of a casual fan. I saw the second trilogy in the theaters…[Now] I can have an educated conversation about the universe in general because I understand the mythology behind it.” Her biggest geek-out so far? “I…went to Skywalker Ranch. They rolled out the real R2-D2 that had been in the movies. You can call me a nerd if my favorite actor I ever worked with was R2-D2.”Learn more about Ashley and her various geekloves in our exclusive one-on-one interview. Just so you know, she wants to make the magic happen for male fans, too. “I can’t say this is in the immediate future because I want to do it right…but I would love to make the fanboys out there a little crazy. I would love to figure out how to do Slave Leia lingerie.” Lingerie By Leia? Sign us up for the Rebellion.