Reading is just more fun when it’s in 3D. 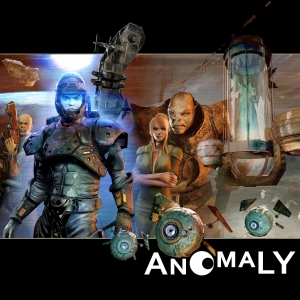 To many in Hollywood, Skip Brittenham is one of the industry’s most prominent lawyers. But Skip isn’t just a high-powered entertainment lawyer; he’s also the driving narrative force behind Anomaly, a sprawling sci-fi space opera of a comic book which he created with Witchblade co-creator Brian Haberlin. Set in the 28th Century when most of mankind lives in off-world colonies (read: space slums) and a corporate oligarchy known as The Conglomerate conquers planets to stripmine them for valuable resources, Anomaly centers on a diplomatic mission to a mysterious, uncharted planet where things quickly go awry. What unfolds next is a war for the fate of the planet, aptly named Anomaly, and the beginnings of a much larger anti-Conglomerate resistance. If that wasn’t enough to spool up your FTL excitement engines, then brace yourselves because there’s an Augmented Reality app that brings hundreds of the book’s images to incredible 3D animated life. And this isn’t just a flimsy 22-page comic; it’s an oversized behemoth of a book, more akin to a coffee table book than just a comic book, and at 378 pages, it’s the longest original graphic novel ever published.But what exactly motivated a high-powered entertainment consigliere like Skip Brittenham to try his hand at writing a graphic novel? To get the skinny, we sat down with Brittenham and Brian Haberlin to talk augmented reality, the future of publishing and the best position in which to read Anomaly. Nerdist News: Skip, you’re best known for being a lawyer. When did you decide you’d like to try your hand at writing a giant graphic novel like this?Skip Brittenham: Well, my wife challenged me to be creative and I thought about it, and the medium that I enjoy the most was comics. I read all these books about how to do this, which were a limited help at best. And I was fortunate enough to do it. I looked at hundreds of artists who I found through various friends of mine in the business. The only person that I wound up calling was Brian, who initially told me he was way too busy to do this. [laughs] Then he came to see me, and he told me that he was initially coming to me to get some work for his out of work friends, but then he read it, we spent some time together, he got more interested and took some time to reflect. Then he called me a few weeks later and said, “I’m in.”NN: What’s been the biggest challenge as a first-time comic author?SB: It’s all a challenge. [laughs] Knowing nothing, it’s all a challenge. Having such a strong partner was great because he could fill in the areas that I didn’t know about. Brian and I had to figure out how to communicate because I had certain things in my head and I didn’t know how to communicate them because I can’t even draw a stick figure. So, I would take photographs or find pictures and PDFs of other artwork and tell him, “I’d like it like this, but slightly different,” and we’d go back and forth for a bit until we found a common ground. Later, we’d be so in sync, that it’d always be almost exactly right.BH: One of the challenges for me was trying to avoid things that had been done before; we wanted to approach it in a fresh way. For example, we saw a very early rough cut of Avatar and, on the drive over, I remember Skip saying, “You know, when they get on the Anomaly planet, what if when they get in the forest the moss lights up as they step on it?” And neither of us had seen Avatar at this point. We saw the rough cut in the screening room and there’s that scene when they’re in the jungle and the exact same thing happens, so we both looked at each other like “we can’t do that.” [laughs] It’s a project that’s 3 years in the works, so sometimes we would have a segment completed, but then it would be done by another project that came out in the interim, so we’d have to edit it out of the book.Read our full interview with Skip and Brian at Nerdist.com, then experience Anomaly for yourself. It’s available now in hefty hardcover form and digitally (with awesome voice actors). Plus it’s in 3D! That’s one more D than standard reading. Truly, the future has arrived.