Course of the Force and Summer of Superheroes bid for your attention. 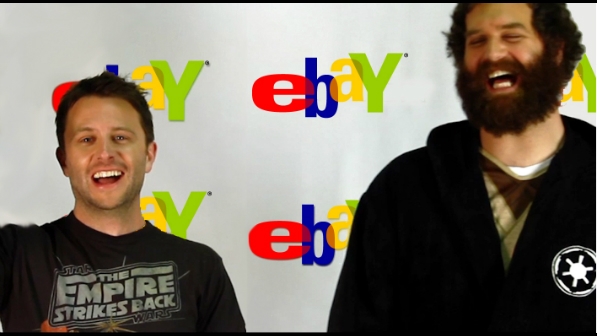 eBay and Course of the Force have come together in a big way. To explain what’s happening, Chris Hardwick and Epic Meal Time‘s Harley Morenstein got together to give you a taste of what’s coming in our auction benefitting Make-A-Wish. Of course, eBay’s been on our mind ever since Weird Al Yankovic wrote a song parody about it, but while we’ve never actually sat down and looked for all the things he described (“A Kleenex used by Dr. Dre,” for one) we love all the nerdy stuff they’ve been getting up to lately, like the Course of the Force and Summer of Superheroes auctions. We also love the time we found that San Diego Comic-Con International exclusive Orko figure, and the one guy who bought up our old VHS collection. Basically, if it’s on your mind, it’s on eBay.Speaking of Comic-Con, as we all know the Course of the Force relay is headed down that direction in force this July, and eBay is going to celebrate the event in style. Spots in the race are going to be auctioned off through June 25th, 2012, with winners also taking home a bonus signed copy of Chris Hardwick’s The Nerdist Way. This year, the real fireworks start three days late, because once the Lightsaber relay gets going on July 7th, there’ll be more goodies to grab, like a Legoland park experience for a family of four, a Legendary Entertainment VIP package that includes a tour of the Warner Bros. lot and museum, a Kotobukiya Darth Maul ArtFX statue signed by Ray Park, a set of Comic-Con exclusive Hallmark ornaments signed by the artists (Star Wars, Batman and Battlestar Galactica), signed All Star Bowling shirts from Chris Hardwick’s All-Star Celebrity Bowling (including the one worn by Jon Hamm), Dark Horse graphic novels, signed Epic Meal Time/Star Wars aprons and so much more.Can’t wait till then to get yourself some auction? Check out eBay’s Summer of Superheroes, going on right now, for some amazing early issues, complete runs and original artwork. Want every Amazing Spider-Man from 1 to 180? Got the cash? It’s here, along with Captain America #1, Avengers #4 and many other comic classics. Before Course of the Force, let your fingers do all the legwork through this treasure trove of online availability. What are you waiting for? Get over to eBay and mind your own bid-ness.