Save Your Quarters for Barcade’s Birthday Bash 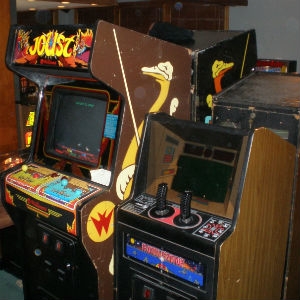 Since the release of Tapper in 1983, philosophers have long pondered why beer and video games go so well together. It could be a subtle chemical reaction or it could just be that we weren’t allowed to drink when we were kids. Forbidden fruit, like in Pac-Man. In any event, these two great tastes are artfully merged at Brooklyn’s Barcade. It’s the city’s only bar where you are likely to drunkenly slur about a Donkey Kong kill screen and actually mean it.Barcade, which opened in 2004, features dozens of vintage arcade cabinets. They are throwing themselves one berserk birthday party. On tap? All of the booze and gaming your hands and liver can handle. The owners also promise to dip their gauntlets into a private stash of rare and notable microbrews like Bruery Autumn Maple and Hill Farmstead Double Galaxy. GeekChicNYC tip: Q-Bert can easily be played with one hand, thus keeping the other one free for forcing your body into a drunken stupor.Make Trax out to Williamsburg on October 13th at 2PM. The party rampages all night, or at least until the quarters run out. Until then, you had better practice your moves on Ghosts’n Goblins. That game is hard.