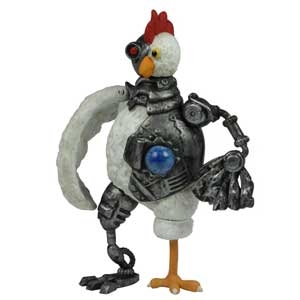 Robot Chicken’s titular robotic chicken has already been through a lot. He was just trying to cross the road when he got hit by a car, peeled off the pavement by a mad scientist, Frankensteined into a chicken/cyborg hybrid and forced to watch the never-ending stream of dark clips that make up the Adult Swim show.Plus, now he’s going to have to sit on your dirty shelf.GCD is thrilled to exclusively debut the first image of the new 10-inch Robot Chicken figure from the toymaker Jazwares. It’s part of the first wave of toys from the Adult Swim hit, a wave which will also include smaller-scaled figures of the Mad Scientist with the Chicken, the Humping Robot (packaged with a humpable washing machine), the Candy Bear caught in a bear trap and the first available figure, a San Diego Comic-Con exclusive of the show’s signature Nerd character. The toys won’t go on sale till August at the earliest, but early pics of the entire line will be unveiled in ToyFare magazine, issue No. 157, on sale July 14. So make sure to pick that up.“Robot Chicken by design is a toy show, so it seemed silly for us not to have toys,” explains co-creator Seth Green, who says that the show hopes to eventually have a huge line of characters available. “When Star Wars put out their first four action figures, it was the Early Bird Pack. It was the most iconic characters: a droid, a hero, the Wookiee. We’re doing that kind of thing.”