We knew they were bad news from the moment we laid eyes on em’. 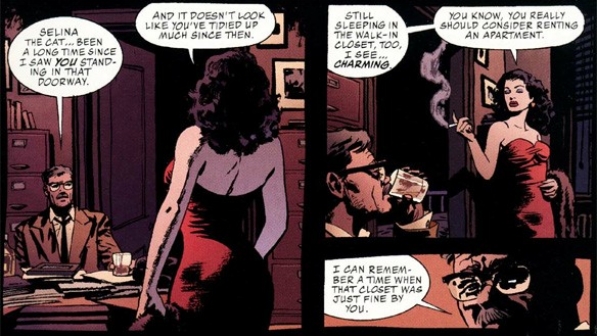 With the success of titles like Ed Brubaker and Sean Phillips’ Fatale and Francesco Francavilla’s pulse-pounding The Black Beetle: No Way Out, it seems like noir is making a gritty, stylized comeback at comic shops across the country. To celebrate (and because we believe in respecting our elders), we’ve assembled a round-up of four essential crime noir stories in between long swigs from our hip flask, drags from a cigarette we smoked down to the filter and incessant inner monologues.Batman: Gotham Noir – Choosing the best Ed Brubaker crime noir comic is a true Sophie’s Choice and one that caused much lip-biting, hand-wringing and pensive head-shaking around the office. While the gritty crime-procedural drama of Gotham Central is one of the best Batman titles we’ve ever read, we have to opt for Brubaker and Sean Phillips’ first collaboration, Batman: Gotham Noir. Offering a delightfully dark version of Gotham with pulpy twists on villains like Two Face, Joker and Catwoman, Gotham Noir is so steeped in 1940’s noir tropes that ex-cop-turned-private-eye Jim Gordon’s ex-lover actually shows up to his office in a slinky red Jessica Rabbit dress. It is to Brubaker’s repeated credit that he can manage to write a compelling Batman book in which Batman himself is a background character. This was Elseworlds at its hardboiled finest – ’nuff said.Sin City – If anyone describes Frank Miller’s Sin City as a “lighthearted romp,” then do not trust them because they either did not read it or they are a certified sociopath. Much of Miller’s other work (Daredevil, Batman: Year One) has noir-ish elements to them, but Sin City is so hardboiled it turned back into a normal egg. Sin City is a world of extremes – extreme violence, extreme sexuality and extreme characters (Marv on the electric chair anyone?), so it makes sense that this feels like crime noir a la Spinal Tap: everything’s turned up to eleven. Richard Stark’s Parker – Don’t let the Jason Statham film of the same name confuse you – Parker is a milestone piece of pulp noir fiction through and through. Written by Donald Westlake under the nom de guerre Richard Stark, the Parker novels, which center on Parker, a ruthless killer with a strict, albeit skewed sense of morality, have been adapted for film three times, but it’s in Darwyn Cooke’s adaptations of The Hunter and The Outfit where the novels find new life. Cooke’s stylized version of Parker’s world is like pop art splattered with blood; it lends the prose a stark brutality and sense of foreboding entirely apropos of the subject matter and time period. Parker is selfish, brutish, flawed and nasty – but we wouldn’t take him any other way.Stumptown – You’ve got to hand it to Greg Rucka; he can write a killer female lead like none other and Stumptown‘s Dex Parios is no exception. Dex is a private eye in Portland, Oregon and like all good private eyes she has a crippling vice that dominates her life (gambling, in her case). Deeply flawed, but endearing, Dex gets caught up in a web of murder, deceit and, well, more gambling when casino bosses offer to clear her debts in exchange for help on a case. Add in Matt Southworth’s gorgeous artwork which brings the world of Stumptown to rich, shadowy life and the only mystery left unsolved is why you haven’t picked this title up yet.What is your favorite noir comic? Let us know on Facebook, Twitter and Google+!