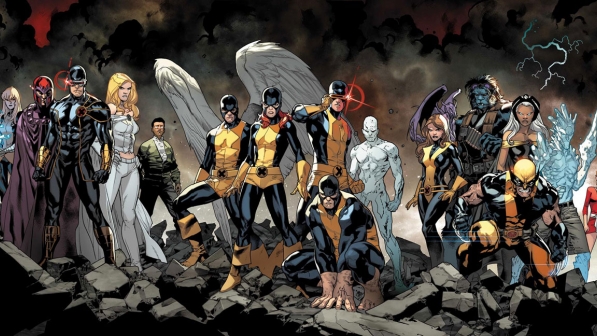 If you don’t already know the name David Marquez, you will soon. The All-New X-Men artist began his career as an animator on Richard Linklater’s trippy A Scanner Darkly and has since left rotoscoping Keanu Reeves behind to become one of the hottest artists in comics, creating dynamic pieces for titles like Ultimate Spider-Man with Brian Michael Bendis, Syndrome and Marvel NOW’s All-New X-Men. We caught up with the rising star and all-around nice dude to talk Marvel milestones, putting his own spin on the X-Men and his forthcoming creator-owned work, The Joyners in 3D, which is, well, in 3D. You read that right – 3D! That’s one more “D” than we’re used to getting in our comics!Nerdist News: Talk to us about All-New X-Men. This is the original X-Men brought back to the current timeline. What can we expect from the book?David Marquez: As with all of Brian’s books, there’s a huge focus on the interaction between characters and their emotional arcs. The Original 5 X-Men are stuck in what is, to them, a truly dystopian future and the true extent and enormity of their situation is only now starting to sink in. In the first story arc, Brian and Stuart put the X-Men, past and present, on a speeding train, culminating in the decision that the Original 5 were going to be sticking around. For my arc, you really see each team member slowly coming to grips with that decision. Oh, and there are a ton of awesome fight scenes.NN: You were also part of one of the biggest events of last year – the introduction of Miles Morales in Ultimate Spider-Man. Will All-New X-Men shake up the Marvel Universe’s status quo in a similar way?DM: Absolutely! Miles Morales in Ultimate Spider-Man introduced us to an entirely new character learning how to become a superhero, and we get to learn about the challenges – physical and emotional – with him. With All-New X-Men, we are reintroduced to characters we’ve loved and cherished for years, but in a form still so innocent and naïve that the world is, for them, entirely new.  Just like with Miles, we as readers and fans gain a fresh perspective on the world of the modern Marvel Universe, in all its glory and in all its flaws.NN: Many of our readers aspire to enter industries like the one you’re in. What do you know now that you wish you had known when you were first starting out?DM: As important as work is, taking time for yourself is just as important. As long as you nail your deadline.Be sure to read our full interview with David Marquez at Nerdist.com and for the latest on David’s work check out his website!