Venture back into the world of Avatar: The Last Airbender! 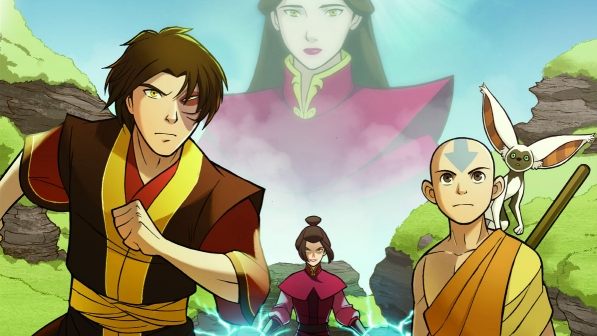 Adapting a film or television show into a comic book is always a risky proposition – you can wind up with a hollow attempt to cash in on a beloved franchise or you can wind up with something seriously awesome that not only expands the universe, but makes meaningful contributions to it. With Dark Horse’s Avatar: The Last Airbender comics, it is unquestionably a case of the latter, and today’s release of The Search – Part 1, the first in a three-part original graphic novel series, is no exception. With stellar art by Gurihiru, a story developed by series co-creators Michael Dante DiMartino and Bryan Konietzko and written by Gene Luen Yang (who we interviewed at Nerdist.com), this book has all the elements of a great comic – no bending required.Set between the end of the Avatar television series and the start of Legend of Korra, The Search tackles one of the biggest questions in Avatar history – the mystery of what happened to Zuko’s mother. Remember that loose thread from the series finale? Yeah, we thought so. Split between flashbacks and present day, The Search follows Aang and the gang as they journey to the Spirit World and beyond to uncover the truth. Also joining them on their quest is the queen of crazy, Zuko’s mentally unbalanced, lightning slingin’ sister Azula, so you just know that it’s going to be one of those road trips.Need more convincing? Peep Dark Horse’s snazzy new book trailer then read our interview with The Search author Gene Luen Yang to get the inside scoop on what this book means for the world of Avatar: The Last Airbender, what’s coming down the pipeline from him and more. For fans of the series and newcomers alike, The Search is a terrific, fast-paced read that gleefully throws the reader back into the world of Avatar, a trip which we’re always eager to take.

Plus an interview with writer Travis Beachammore

Tales guaranteed to astonish or at least facepalm.more