Comic Book Day: Mike Mignola Takes Us to Hell (And Back)

Plus the latest on B.P.R.D. Vampire! 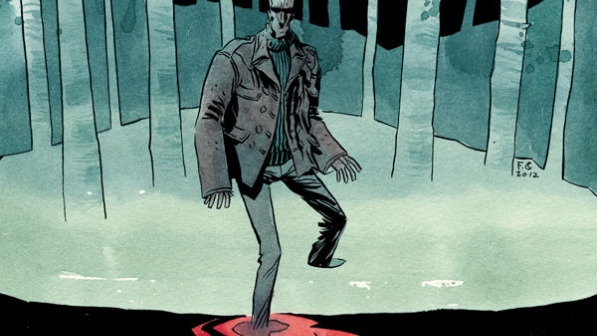 There aren’t many people that we’d follow into hell, but Mike Mignola is definitely one of them. The Hellboy creator has resumed writing and artistic duties on Dark Horse’s new ongoing Hellboy in Hell series and he oversaw the newest B.P.R.D. miniseries, B.P.R.D.: Vampire, written and illustrated by Brazilian wondertwins Fábio Moon and Gabriel Bá, which hits stands everywhere today. Following the story of Simon Anders, it is “one doomed agent’s quest for revenge against a clan of vampires and their gorgon-eyed queen.” So, in a word, awesome. With an ever-expanding empire at his fingertips, we leaped at the chance to sit down with the multi-talented Mignola to talk everything from what inspired his vision of Hell to the best piece of advice Frank Miller ever gave him. So, without further ado, let’s all go to Hell.

Nerdist News: Tell us about B.P.R.D.: Vampire. We understand that it’s a direct sequel to B.P.R.D.: 1948. Where in the chronology does this fit in and what can fans expect from it?

Mike Mignola: It takes place shortly after B.P.R.D.: 1948. I originally thought it was going to run parallel to that book, but I try not to tell John Arcudi what to do and I don’t want to say, “You have to coordinate with these other guys.” But John actually did come in and deal with the Simon character in B.P.R.D.: 1948. If Vampire takes place after ’48, maybe you can walk this guy by in the background, you know, reintroduce him. John actually did quite a bit with him though, which he coordinated with Fábio Moon and Gabriel Bá, who wrote and drew the Vampire book, so I suspect it takes place within a year or so after 1948.

N: While we love your art, I was very excited to see that Fábio Moon and Gabriel Bá were handling artistic duties. How did they get involved?

MM: I’ve loved the idea for a long time of this B.P.R.D. agent who’s become infected with this vampire thing, which we started back in 1947. We did this gag back in B.P.R.D.: 1947, Joshua Dysart and I, and I love that this guy was screwed. There was just no way this guy was ever going to get back to being normal. I had no plans to get back to that, but we wanted to do another project with Gabriel and Fábio and they’re really good, really interesting writers. I love Daytripper even though I only understood a quarter of it, and I asked them if they’d be interested in taking this Simon character who they kind of created in 1947 and just running with it in any direction they wanted to go. I had an idea of how to start things off and some directions it could go, but I really wanted to say, “Here’s a character. We don’t have any plans for this character. Let’s treat this guy as your character. Here’s a suggestion on how to start and you just take it wherever you want to take it.”

NN: Hellboy in Hell was a long time in the making. When you’ve been thinking about these images and plotlines for so long, is it more challenging on yourself to get it exactly right?

MM: Yeah, the problem is always going to be when you’ve been thinking about a particular image or storyline for five years and you sit down and draw it, you go, “Oh, I thought it was going to look better than that.” Stuff always looks better inside your head. Fortunately, I was so champing at the bit to do that book that I got through the first couple issues almost on pure adrenaline. I was so excited to be doing it that I didn’t really stop and beat myself up over “this doesn’t look right” or “that could be better.” It’s kind of a slow introduction to the world even though the second issue’s entirely a tour of the world, we only see snapshots, little slivers of that world, and I know that I plan to do so much stuff in this world, I kept telling myself, “Don’t drive yourself crazy – you’ll have plenty of time to go back and go into more detail. That’ll look better the next time you draw it.” Be sure to read our complete interview with Mike Mignola on Nerdist.com, then do yourself a favor and pick up the excellent B.P.R.D.: Vampire #1 from your local comic book store.