Because one hero just isn’t enough! 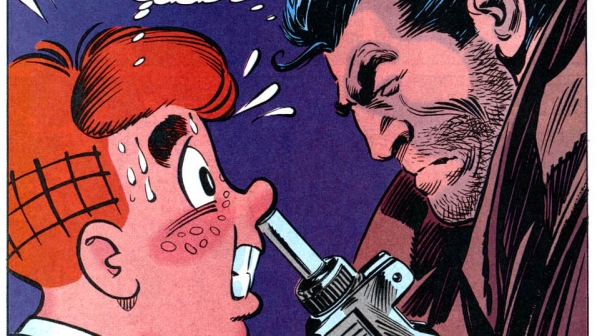 With DC’s Trinity War and Marvel’s Infinity on the way, comic book readers are bracing for the universe-shattering impact of these massive crossover events. We’re here to help you ramp up for the awesome action coming your way by highlighting four of our favorite crossover comics.DC vs. Marvel Comics – Ah, the Amalgam Universe, how could we ever forget you and your eyebrow-raising mash-up metahumans like Dark Claw, Doctor Strangefate and Nightcreeper? The four issue 1996 mini-series saw DC and Marvel joining forces to pit their most popular characters head-to-head in a series of epic battles, some of which relied on fans to vote on the outcome. Seeing Batman slug it out with Captain America, Hulk try to smash Superman and Aquaman doing righteous water-based battle with Namor were all awesome wish fulfillment at its finest.Batman vs. Predator – Written by Dave Gibbons, penciled by Andy Kubert, inked by Adam Kubert and published by DC and Dark Horse Comics, 1991’s Batman vs. Predator finds the Dark Knight hot on the trail of a mysterious assassin who’s leaving an increasingly grisly series of bodies in his wake. What assassin, you ask? None other than the Predator from John McTiernan film fame! You know you’re a badass when you can convince a Predator to commit seppuku in front of you and his entire fleet. (N.B. Much like Predator, there are sequels to this story, but we recommend sticking with the original)Archie Meets the Punisher – If you thought that the recently announced zombie apocalypse-themed Afterlife with Archie was the weirdest thing to hit Riverdale, then you must not know about 1994’s Archie Meets the Punisher, a comic book which actually exists and introduced all-American teenager Archie Andrews to the bloodthirsty avatar of vengeance himself, Frank Castle. Sent to Riverdale to hunt down a mysterious drug dealer named “Red,” the Punisher naturally mistakes Archie as the drug-peddler he was sent to take down. Hilarity and a slew of classic comic book cameos ensue to create what is actually a rather enjoyable, clever one-shot. Now we really want to see the Wolverine meets Jughead crossover they teased on the final page!Marvel and DC Present the Uncanny X-Men and The New Teen Titans – Although 1982 marked the release of Michael Jackson’s Thriller, true comic book fans remember it as the year that DC and Marvel teamed up to birth Marvel and DC Present the Uncanny X-Men and The New Teen Titans. An epic crossover story written by Chris Claremont and illustrated by Walt Simonson, the book brought two of the industry’s most popular teams together to prevent Darkseid from harnessing the power of the Phoenix. Although the planned sequel by Marv Wolfman and George Perez was scrapped, this book will always have a special place in our hearts.What’s your favorite comic book crossover? Let us know on Facebook and Twitter!