Course of the Force Takes a Trip Down the West Coast

Lando Knows the Left Coast is the Best Coast 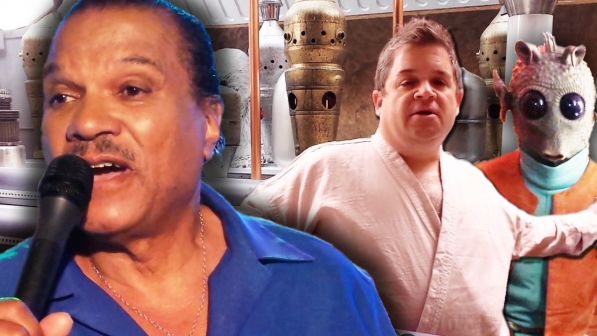 It may have been a wretched hive of scum and villainy to Obi Wan Kenobi, but many in Mos Eisley probably thought of Chalmun’s Cantina as their friendly neighborhood watering hole. Chalmun’s is just six letters away from being Cheers. It’s in that spirit our friends at Nerdist have recreated the bar from a galaxy far, far away for a very special karaoke night. To celebrate today’s launch of Course of the Force 2013, Nerdist has replicated the cantina (with added surprises) for a new video starring Chris Hardwick, Course of the Force co-host Carrie Keagan, Patton Oswalt, Mike Phirman and Billy Dee Williams. THE Billy Dee Williams.The video, which was shot entirely on Samsung Galaxy S4 smartphones, features a performance of Coconut Records’ “The West Coast” from a certain Bespin Administrator. The song was written by actor Jason Schwartzman, who also makes an appearance in the video. Who does he portray? “I think I’m just a good person who drinks and hangs out at a bar that’s full of pirates.”To check out the Greedo-frying fun, and for more behind-the-scenes stuff from the cast and crew, head over to Nerdist.com. Follow all the updates for this year’s Course of the Force and subscribe to the Nerdist Channel for video updates from the whole week-long event!

Sayonara For Now: An Important Update About the Newsletter

We want to be the very best, like no one ever was.more

Course of the Force Takes a Trip Down the West Coast

Lando Knows the Left Coast is the Best Coastmore

TOKYOPOP on YouTube: I Luv Halloween and Raw Tuna