See where your favorite city-dwellers called it quits. 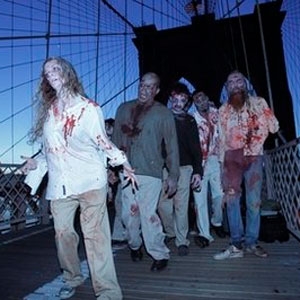 There is a reason zombie movies are rarely set in New York. This city has so many people that surviving a Romero flick would be near impossible. The dense population might make it a crappy place to ride out a mass of the undead, but it’s the perfect place to take a ride out to the mass of regular dead. A new sightseeing tour lets you cruise the city in style as you check out the final resting places of a swarm of notable luminaries. Dead Apple Tours packs you in a renovated hearse for cadaverous city cruise. You’ll get to see where President James Monroe spent his last few days and you’ll do the same for Keith Haring, Jean-Michel Basquiat and many others. You might even come face to face with the pissed off and drunk ghost of Sid Vicious. Don’t worry. The hearse is equipped with automatic locks. The tours begin their descent into the underworld twice daily, at 10:30AM and 7:30PM. You had better bring some canned food and an axe just in case. Lieutenant Colonel Robert Neville isn’t one of the legends on the itinerary.