The action icon can still kick it with the best of ’em. 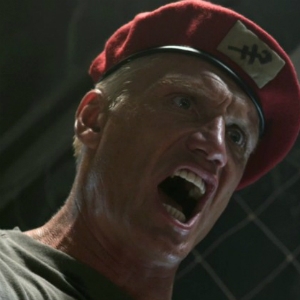 He was He-Man and the Punisher back in the ’80s after beating Apollo Creed to death, but today sees Dolph Lundgren returning to what has become his most enduring franchise yet – Universal Soldier. In Day of Reckoning, shot in 3D and with more of a horror bent than the previous installments, Lundgren’s Andrew Scott (or a clone…or a clone of a clone…) is back, but we’re not certain which side he’s on. Thankfully, in person the ’80s’ most morally ambiguous action star is just a flat-out nice guy, and he allowed us to live after we dared to question him.Nerdist News: When you’re shooting a fight in 3D, is it harder to do – more full-contact because you can’t fake the perspective?Dolph Lundgren: Yeah. It is more difficult, because you have to go much closer with the hits, and also there are other aspects: you try to keep it going because of momentum, and your body gets cold and all of that, but 3D can have more technical problems. So it’s a little annoying, and more of a challenge.NN: With a guy like Andrei Arlovski, where he has MMA fighting experience and you have karate experience, is it easier maybe to not pull your punches and do a little more full-contact, because you know you’re both used to that?DL: Yeah, for sure. I mean, Arlovski actually is a great fighter; he just didn’t have experience in taking hits, so we did have problems with him sometimes selling something, where he would say [adopts fake Russian accent] “Okay, just hit me for real! Kick me! Is okay!” And then you kind of go, should I really hit this guy, because then he’s gonna come at me with a chair or something after that? But I had a fight with him in the beginning, and I liked that fight because it feels very real and rough, and he actually, when I kicked him into the corner with all those breakaway chairs – that’s a real kick, because he couldn’t sell it otherwise.In our full interview with Dolph Lundgren, we discuss Ivan Drago, He-Man, Jack Abramoff, Expendables 3 and more! Universal Soldier: Day of Reckoning opens theatrically today, and is available on-demand in 2D and 3D versions.