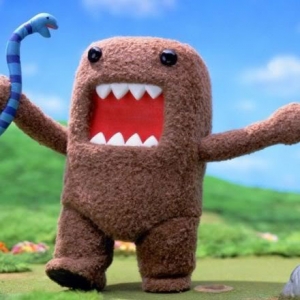 Although Domo gained a toehold in American nerd culture thanks to online groups dedicated Photoshop tomfoolery, he actually originated as the mascot of Japan’s public TV station NHK. Recognizing their character’s growing popularity here in the States, they’re tossing Domo’s likeness onto as much merch as possible. If you or someone you love is looking to have a very, very Domo Christmas, here are some of your best options:

Domo the Manga Many of Domo’s adventures include either watching TV or farting. So clearly this is a top-notch manga.

Domoooo! Attack Energy Drink Domo’s favorite food is meat and potato stew. Draw your own conclusions about what this energy drink may taste like.

Domo Hat Understandably, this baseball cap features only Domo’s mouth and eyes—although including his legs as ear flaps coulda been kinda cool.