You Will Know Jack: iPad Meets The Kennedys 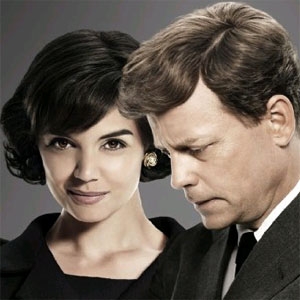 It’s tough to sum up the entire JFK presidency in eight episodes – hell, it took Oliver Stone over three hours just to do the assassination part. But in the new Reelz Channel miniseries The Kennedys, from 24 executive producer Joel Surnow, viewers won’t be lacking for details. Not only because the presidency it depicts is interspersed with Lost-style flashbacks to formative family events, but also because, well, there’s an app for that.Designed to automatically sync up with each new episode, the free app allows your iPad or iPad2 to effectively give you Blu-ray-style special features live. When John F. Kennedy (Greg Kinnear, or perhaps we should say Kinneeah) first appears, the app provides pictures of his inauguration, and video of his infamous debate with a sweaty Richard Nixon. When Jackie (Katie Holmes) shows up, so do wedding photos and a video tour of the white house hosted by the real deal.No iPad? No prob. Reelz has accounted for the fact that geeks with a passion for the past don’t always have all the newest tools of the future, so they’ve also made a web-browser version available that works on most computers.Alternately, non history buffs can stay “spoiler-free” and let the show unfold on their TV alone. The app’s always available for re-runs too.The Kennedys debuts Sunday at 8 p.m. on Reelz Channel.