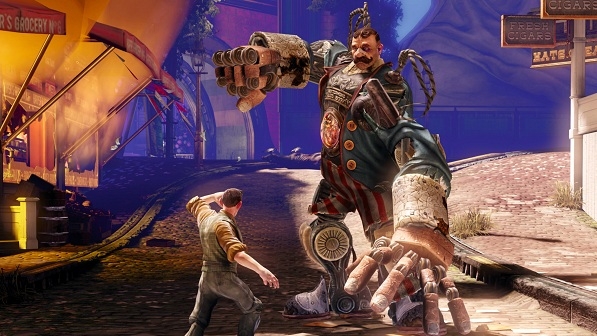 History seems so much cooler, and more terrifying, in the world of the BioShock game series. For its first two entries, players were taken to an underwater Objectivist dystopia in the 1960s and forced to fend off genetically-enhanced soldiers called “Splicers.” In the newest installment, BioShock Infinite, the gameplay reaches for the skies, creating a brand new city to explore… one that floats instead of sinking. Set in 1912, the action follows a former Pinkerton agent who is tasked with retrieving a kidnapped girl from a massive, balloon-powered city called “Columbia,” which looks like Bespin if it were designed by the Continental Congress. The designs in the game are truly dazzling; dazzling enough to warrant a book, The Art of BioShock Infinite from Dark Horse. You can win a copy of that book by entering our exclusive giveaway, and you can get more chances by visiting our Facebook, Twitter and Google+ pages. It’s a Steampunk extravaganza!As disgraced former Pinkerton agent Booker DeWitt, you can swing and slide from platform to platform on things called “Sky-Lines,” from which you can also fight against people who want to kill you. Being a BioShock game, there’s plenty of violence and a little metaphysical magic as well. Booker can get and enhance psychokinetic powers by picking up various plasmids, and Elizabeth, the girl he’s rescuing, can make those powers even more effective. Nothing quite like having a good sidekick. All this allows you to fight against people in weird mechanical suits and a “big daddy” of a creature called Songbird who wants to put Elizabeth back in her cell. Not particularly friendly.So let’s run the checklist: Floating city, zip-lines, old-timey sci-fi weaponry, telekinesis, monsters and gore – yep, that’s a game for us all right. BioShock Infinite is going to be one of the year’s most talked-about games, and the visual design of it will play a large part in that water cooler chatter. To get deeper inside the look of the game, pick up Dark Horse’s The Art of BioShock Infinite, or if you’d rather have it flown to you like Columbia’s pizza delivery (we’re guessing), you can enter our contest for a chance to win a copy. Once you’ve done that, make sure you float over to our Google+, Facebook and Twitter pages to give yourself extra entries. You’ve only got until midnight on April 1st to enter, so don’t be a fool – enter quickly. The game will be around for awhile, but this contest won’t be.