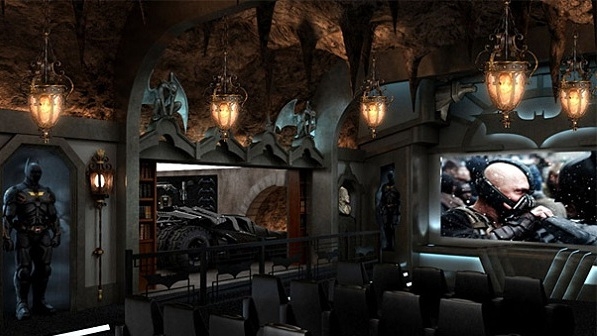 It’s one thing to appreciate your favorite movie’s visual aesthetic (or TV show, your format preference is for you alone to decide), but it’s another thing entirely to want (and have the means) to bring that aesthetic into the design of a room in your home, specifically a home theater.  That’s a true (very wealthy) nerd. There are loads of great, geeky theaters out there, but we made a list of our five favorites for you to gander. We noticed there hasn’t yet been a theater designed to look like the interior of the TARDIS. Dibs. See a larger gallery of home theaters on Nerdist.com.

Get Your Timbers Shivered – This is one deck we wouldn’t mind swabbing, whatever that might mean. A mammoth, magnificent pirate ship-themed home theater was designed and built in Palm Beach, Florida. Imagine, if you will, walking up to a ship’s wheel that overlooks a lowered platform. Walking down the stairs brings you to a wooden deck that looks for all the world like it belongs on an old pirate vessel. Of course, there’s a giant screen at the one end and big, cushy chairs facing it, but there’s a mast and sail hanging over the viewers’ head. It’s like a Kraken of awesome has been unleashed.

Watching in a Lost City – Despite being a spin-off from a good-not-great sci-fi movie, Stargate SG-1 proved an incredibly popular and long-lasting TV series that spun-off a couple of other shows itself. One fan of this universe had a $70,000 theater constructed in their home based on Stargate: Atlantis. It features motion-sensor sliding doors, a star dome overhead that shows stars and comets streaking by and, of course, a giant circular screen surrounded by the titular gate itself. It can glow blue as well as show movies to even further mimic the show. So, technically, you’d be watching things in another dimension.

A Fully-Operational Viewing Station – It’s no moon, guys. The two people who used to run the Official Star Wars Fan Club parlayed their love of the saga into a three-room home theater designed by lead prequel designer Doug Chiang to look like the Death Star interior. That’s pretty snazzy unto itself, but it also boasts life-size replicas of Boba Fett and C-3PO. Outside the theater is a pretty fancy entryway with posters and big, huge doors. The only thing we’d like better would be a Dagobah-themed viewing room, complete with temperature-controlled marshes and bogs. We’re weird, though.

Blu-ray, Engage! – It’s a pretty well-known fact that Star Trek fans are among the most obsessive of the bunch, and this certainly extends to the way they choose to watch it. There are two incredibly awesome Enterprise bridge home theaters we love: One from TNG which boasts motion-activated airlock doors, a four-stool bar and a hard-drive with over 3,800 DVDs-worth of movies. The other is inspired by the Original Series’ film series and cost $3 million. It’s a good thing the ships’ bridge already looked like a theater, what with the viewscreens and all.

The Movie-Lover’s Reckoning – A new theater being built in Connecticut might be our favorite theater of all. Dubbed “The Dark Knight Theater,” this swanky screening room features a mix of Wayne Manor, the Batcave and Gotham City itself. With Batcomputer-like screens surrounding the room’s fireplace, two Batsuits on the walls and a bookshelf that slides open to reveal the Batmobile, which we assume was sold separately, this amazing room is one we wish we could fit in our tiny apartments.To see more of these and other awesomely geeky home theaters, check out our spread on Nerdist.com.