Make like a tree and get out of here to see the coolest futuristic gadgets. 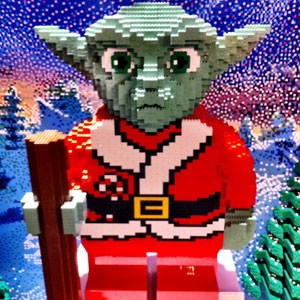 In 1989, Robert Zemeckis predicted that by 2015 we would have dynamic multi-channel video screens, powerlacing shoes, devices that cook delicious four-inch diameter foods and Pepsi bottles with built-in straws. Well he was way off the mark projecting straw technology, but the other stuff does exist now with four years to spare. You can see them first hand at the Gizmodo Gallery open through Sunday at 329 Broome Street.The gallery’s 82-inch multi-touch video screen that lets you move around and re-size multiple videos (you can play a trilogy of trilogies simultaneously!), a pair of the mythical electroluminescent Nikes and a machine that cranks out 200 perfectly formed pancakes every hour are just the cherry on top of the figurative Garden Center fruit dispenser. They also have the best gadgets of 2011 and years past (like a bona fide antique 1984 Apple Macintosh signed by Steve Jobs). Plus, you can play the world’s biggest 2000-pound claw machine (online or in person) and try to win a life-size Lego Yoda statue.Check this out with your binocular card: at 9PM tonight, the gallery is handing out free Nerf Blasters to the first 40 visitors for an all-out foam disc blitzkrieg. You can pretend you’re one of those sexy future cops from Unit N11-11. Get there early because only 100 people will fit in the space at any given time. Remember we’re talking DeLoreans, not a TARDIS.