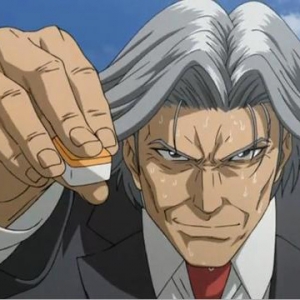 Barack Obama’s appearance in Amazing Spider-Man #583 may have resulted in the best-selling comic book this decade, but when it comes to cartoon politicians, President Obama would get his illustrated ass handed to him by—obviously—former Japanese Prime Minister Junichiro Koizumi.Sorry, Hillary Clinton’s appearance in Female Force.As you all no doubt already know, Koizumi was the extremely popular leader of Japan from 2001 to 2006. He was much loved for both pulling his country out of an economic slump and for having kick-ass hair. Drawn into illustrated life with the manga The Legend of Koizumi, the Prime Minister battled other global leaders… in mahjong. Awesomely bizarre and wickedly illustrated, The Legend of Koizumi has now become an equally striking anime, the first seven-minute installment of which has debuted online. Watch as Koizumi survives an assassin’s bullet then engages in some  intense mahjong against a spit-spraying Kim Jong-il. (Former President George W. Bush also shows up, although just long enough to fall off a Segway.)Assuming the anime’s future episodes adhere to the plots of the manga, Koizumi will soon find himself mahjonging against the likes of Adolf Hitler and the Pope. If we’re really lucky, he’ll even visit his moonbase. A DVD of episodes goes on sale in Japan on February 26th. If the global powers allow it, YouTube translations will soon follow.