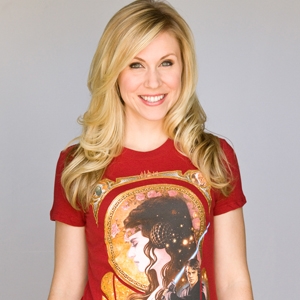 Not only is Ashley Eckstein a real-life hottie, she’s also a Jedi in training. As the voice of Ahsoka Tano in the Clone Wars cartoons, Ashley spent lots of time at conventions. There, she realized female fans don’t get much merch. Now, she’s engaging the fashion galaxy with all the voracity of a Rebel trench-run, bringing Star Wars fashions for the ladies. Finally, a piece of Star Wars swag you can buy (or better yet, WIN) your girlfriend that she’ll actually like. We’re giving away five of Ashley’s awesome Star Wars tees on Facebook!GCD: How does a voiceover artist start a sci-fi t-shirt company? Ashley Eckstein: When I would go to conventions with Clone Wars, I recognized that half the fans were women, and there wasn’t a lot of merchandise for them. I started my own company, which is HerUniverse, and partnered with a company that does merchandise for Broadway shows. I approached Lucasfilm, and pitched them on the first Star Wars clothing line that’s just for women. GCD: How involved are you in the actual design aspect? AE: I’m involved in everything; I pick out the garments, worked on all designs, and logos. The quality of the product is very important to me. If I wouldn’t buy it as consumer, I’m not going to try to sell it to other people. Most of the concepts come from me and a small group of designers. We’ve had some guest artists, too. Dave Filoni, supervising director of The Clone Wars, did a shirt for us. GCD: Were you a Star Wars fan before joining The Clone Wars as a cast member? AE: I enjoyed the movies, but I was more of a casual fan. I saw both trilogies in the theaters. I can call myself more of a true fan now. I can have an educated conversation about the universe in general because I understand the mythology behind it. I learned very quickly not to claim myself as a true fan if I didn’t have the knowledge to back it up. The second you do that, you’ll get called out. GCD: Now that you’re a real fan, what Star Wars properties trip your own trigger? AE: I really like Star Wars manga, and the anime-style art. We have a zip-up hoodie that was inspired by Bonnie Burton from Lucasfilm. She runs the Star Wars social media outlets, and the manga designs were her personal favorite. GCD: Is there any plan on your part to incorporate Leia’s gold bikini in your designs? AE: I can’t say this is in the immediate future because I want to do it right…but I would love to send the fanboys out there a little crazy: I would love to figure out how to do Slave Leia lingerie. But like I said, that won’t be anytime soon, because we have to figure out how to do it really, really well.

GCD: You’re now an official part of the Star Wars universe. Have you ever had any great moments where you nerded out in the process of your work? AE: I did a behind-the-scenes show for Cartoon Network, and went to Skywalker Ranch. They rolled out the real R2-D2 that had been in the movies. Getting to touch the real R2-D2 was cool. You can call me a nerd if my favorite actor I ever worked with was R2-D2. GCD: We’ve been to Skywalker Ranch. It’s no lie to say we would like to live there. Forever. AE: The Ranch is truly amazing. When you first drive in, you see this big redwoods. You feel like an Ewok is going to pop out from behind the trees. GCD: Do you have a non-Star Wars pop-cult obsession? AE: I can finally out myself as a true nerd: I have a huge Alice In Wonderland collection, big enough that I have an entire room dedicated to it in my house. I would much rather buy a cool piece of Alice In Wonderland memorabilia or toy than a purse or a nice pair of shoes.  It is also true that I would like to build a giant mushroom bed in my Alice room. GCD: What’s the coolest piece in your collection? AE: For my wedding, when you usually register for fine china, mine actually has Alice In Wonderland on it. Perfect for tea parties. I also have an Alice poster that originally hung in the theme park that was given to me as a gift. The great piece that I don’t have yet, but will one day get, is an actual teacup from the Mad Hatter ride. I prefer the animated classic version of Alice, even though I thought Tim Burton’s version was fantastic. One day, I will find one of those full-size teacups. I will.