The Staff of Champion! hail the King of New Media 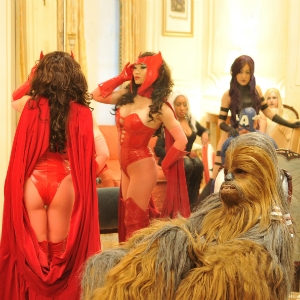 So how could Wizard magazine alums Mike Cotton and Steve Blackwell, along with Howard Stern’s resident geekspert Ralph Cirella, follow up their debut download of Champion! magazine? With a cover photo shot by Stern (preview image left), of course! We asked them about it.GeekChicDaily: How did Howard Stern approach your cover photoshoot?Ralph Cirella: He’s one of those people who’s just hard on himself. Even the other day, we were looking at some pictures and he goes, “I really wish we would’ve gotten that other set-up.” He came in on a Sunday and gave us seven hours, brought his cameras and lights; it was as professional as any shoot that I’ve ever been on before. I think people are gonna be very impressed when they see all this – we also have video of him in action shooting.GCD: Will we see Champion! for the Android at some point?Steve Blackwell: We’re looking into expanding into the Android markets but ideally, we would prefer that all of our readers share the same experience. That platform does not currently allow us to use some of the interactive tools we put into our iPad version of the product.GCD: Why a digital magazine and not a blog? Mike Cotton:  Blogs and websites just don’t have the impact or edge they once did. Today, it’s not about the Internet, it’s about how you receive news and entertainment and that’s through apps.The new issue of Champion! will be on iTunes later this month; read our full interview with the staff for more!