When this master of horror speaks, you will obey. 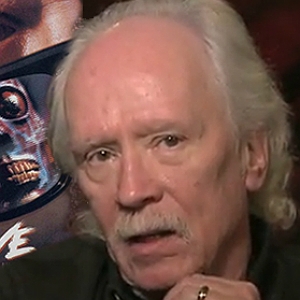 As you cast your ballot today, if you do, bask in the glory of all our freedoms, and rejoice in the fact that you will be selecting the candidate you prefer of your own free will. Or is it? Back in 1988, John Carpenter’s They Live suggested that people make the choices they do because of subliminal messages planted everywhere in the media by aliens. If you missed it back in the day, or want to see it again, we have five brand spanking new Blu-rays to give away (get bonus entries at our Facebook, Twitter and Google+ pages); and if you’d like to know more, well, we got John Carpenter to talk to us about it.Nerdist News: When we first saw They Live, it felt like it had the sort of role you would normally cast Kurt Russell in. Was there ever any thought of that, or was it always Roddy Piper?John Carpenter: No, you see, in this particular case, what I really needed was an everyman. I needed a working-poor guy who was not upper-middle class, he was not middle class; he was somebody almost down and out. And Roddy was perfect for that; just absolutely perfect, so I never thought of anybody else, really.NN: The fight scene in this movie is pretty epic between him and Keith David; did his wrestling training come into play? Did he ever tell Keith to really hit him a little bit and do a little bit more full contact, or were there still rules about that, that you couldn’t incorporate anything of that sort?JC: He sure came in handy! It’s an obvious asset for Roddy, and they rehearsed that fight for essentially a month and a half – roughly a month and a half. By the end, they were so conversant in the fight, they knew it inside and out, they were making contact with each other, like you said. They were hitting each other. But since they knew the fight, there was no injury whatsoever. Yeah, I’m proud of the fight. I like the fight a lot.NN: Can you tell us what you’re working on next?JC: I’ve got a couple of ideas stewing around. I’m working on this comic-book property, Darkchylde…We’ll see if it gets to fruition. These days sometimes it’s difficult to get movies made, but you never know…A couple TV show maybes; it’s all maybes at this point. What I’m really excited about – TRULY excited – is that last night, my Los Angeles Lakers won their first game, and they look great this year. I’m excited about the NBA.Don your metaphorical sunglasses for the full dose of truth from John Carpenter, then enter to win one of five They Live Blu-rays. Bolster your odds with extra shots at our Facebook, Twitter and Google+ pages. Nothing subliminal here; enter by November 12th, 2012, or you’ll get shut out when the contest ends. And don’t forget to vote!