The greatest crossover since Gary Coleman appeared on Silver Spoons 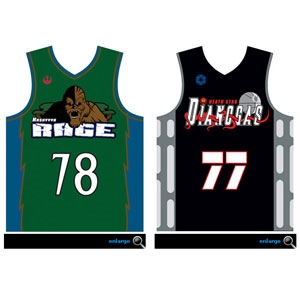 Admit it—you’ve always kind of suspected the worlds of Star Wars and pro basketball would mix well together. Vader mind-choking dudes at the foul line, Boba Fett jetpack dunking and C3PO riding the bench…wait a minute, did we just inadvertently invent the best video game ever?Well, with this year’s NBA playoffs set to get underway in just a few weeks, StarWarsShop.com is offering up replica jerseys from the galaxy’s top two teams—the Kashyyyk Rage of the Rebel Alliance League and the Death Star Dianogas of the Imperial League. The Rage jersey, which is worn by Chewie’s homeworld favorites, features the Rebel insignia above the chest and the number “78,” in honor of the 1978 Star Wars Holiday Special. The jersey worn by the Dianogas—named for the Death Star’s resident trash compactor beast—sports the Imperial crest and the number “77,” as a shout out to the Death Star’s cinematic debut.Both can pre-ordered for $70 each at StarWarsShop.com and both are perfect for any occasion—not just for dates. Wear one while watching the Finals next month, while watching the Finals picture-in-picture during a Star Wars marathon or while shooting a game of T-A-U-N-T-A-U-N out back with friends.