Also, he talks to everyone you’ve ever wanted to meet. 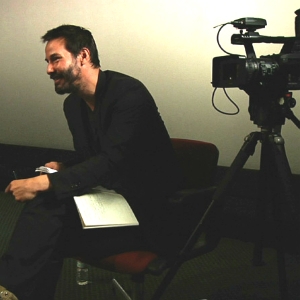 Keanu Reeves’ career has always been inextricably entwined with technology and the future. In his breakthrough role as Ted “Theodore” Logan, he saved the world using time travel and air guitar. In his biggest role as Thomas “Neo” Anderson, he saved the world by optimizing his performance in a neural Internet known as the Matrix. Now, as plain old Keanu Reeves – arguably his most entertaining role to date – he looks to save the world of cinema in Side by Side, a new documentary that he produced and hosts, about the transition from celluloid film to digital.More animated, warm and funny than you’ve usually seen him, Reeves spends much of the movie interviewing heavy-hitters in the industry – Martin Scorsese, George Lucas, Christopher Nolan, David Lynch, the notoriously camera-shy Wachowski siblings and everyone else you can imagine ever wanting to talk to on the topic – ultimately changing his own mind, in a way that may change the viewer’s. Speaking to a few reporters at a recent press event, he discussed the themes that were on the minds of himself and director Chris Kenneally (Crazy Legs Conti: Zen and the Art of Competitive Eating). “When we looked at it, we were like, ‘Where did we come from? Where is the movie industry at? Where are we today? What’s the future look like? What have we lost, and what have we gained?’ I was more of the ‘What are we losing,’ And Chris was more of ‘What are we gaining.’ I would always kind of be the photochemical proponent,  and he would call me nostalgic, and ‘Get with it,’ and ‘Come on, wake up.’ I said, ‘But I love film.’ And he was digital. He was like, ‘Come on!'” Bottom line? Reeves’ upcoming directorial debut, Man of Tai Chi, will be shot on digital. “Really, it was a progress-orial aspect. Also, I did some camera tests. I shot a bunch of cameras, and a bunch of stuff. I wanted…a classical modernity.” Side by Side generally favors digital, brushing off most current technical issues as things that will be worked out by progress, and noting that celluloid-based technologies have developed as far as they likely ever will go. Onscreen, only Christopher Nolan and his D.P. Wally Pfister remain staunch holdouts. The latter refers to himself as “anti-technology,” though as Reeves observes, all filmmaking is technology, saying “I guess he’s demonizing the technology as other, because it’s new and coming in, and it’s not quite the technology he’s using anymore, right? I guess it is arbitrary in that sense.”But even as digital progresses to be just as good or better in terms of image-making than its predecessors – when pressed, Reeves admits that he’d have to see “a really pristine print” projected perfectly in order to tell the difference between that and the best of digital – there’s a clear sadness that an era is closing. Like when David Lynch says he’ll never work with film again, or Scorsese reminisces about getting blood on his fingertips actually cutting and splicing the film. Asked if he himself was okay with the death of film, Reeves held his head in his hands for a moment before quietly replying, “No, not really.”He will be taking full advantage of the ample amounts of cheap bonus footage digital affords, however. “On the website now, they’re doing what they’re calling outtakes. I’d like to personally create an archival aspect of this. We have 140 interviews. I’d like to make that accessible to anybody for free. Like, ‘Here’s the whole interview. Here’s Dennis Muren talking about everything for two hours.'” The only downside? “My producer probably doesn’t want me to make it for free.”As to complaints from some audiences that digital footage doesn’t feel as “real” to some viewers, Reeves (and his film) leaves us with a quote from James Cameron: “When was it ever real?”Side by Side premieres Aug. 17th in Los Angeles, and on VOD Aug. 21st.