Course of the Force builds a path through the park. 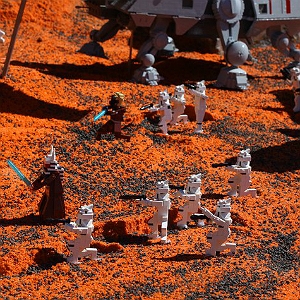 You’ve seen Lego give us everything from haunted houses to veterinary clinics, but until you’ve seen Legoland, you’ve never really experienced the endless customization possibilities. Lego rollercoaster rides, Lego water rides, and replicas of the world’s greatest cities built block by painstaking block (literally) at a scale you’ve only imagined in your yellowest dreams. And to prove Lego can be anything, it’s going to be part of Course of the Force – subscribe to the Nerdist Channel to get an exclusive look at the Course of the Force as it passes through Legoland California.The timing couldn’t be better as the Carlsbad theme park recently expanded their Lego Star Wars miniland. While the participants running their legs of Course of the Force through the park may not have time to take in the full glory of Castle Hill, Land of Adventure, Pirate Shores and all the other sub-kingdoms that are the building blocks of Legoland’s awesomeness, you certainly can when you come to see the park for yourself. As for the Course of the Force runners, surely they will form some memories they’ll never “Lego” of.Lego bricks last practically forever, or so the toybox at the back of our closet tells us, but the Course of the Force only has two more days. Keep your eyes on the Nerdist Channel for an update from the heart of Legoland later today; you won’t want to miss the way our feet move to this particular “Brick House“!