Meet the Housemates of The Real World: Whiterun

There goes the Dominion… 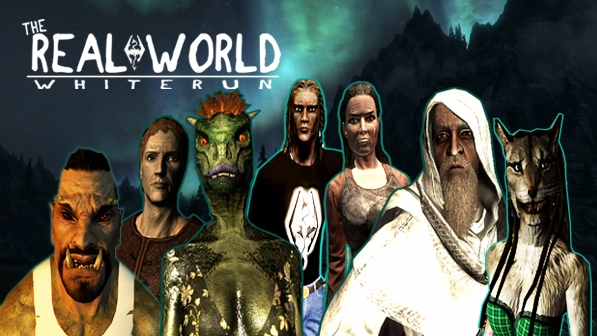 What is it about ’90s reality television that just begs to be lampooned using the in-game engine from Skyrim? The colorful characters sure help. You’ve already seen the experiences of the men and women of COPS: Skyrim and what a joy it must be to police that place; now, the same makers bring you the true story (TRUE STORY!!) of seven completely bonkers, species-diverse strangers picked to live in a surprisingly airy wooden house. This is what happens when people stop forging armor and start getting real. Obviously, we’re referring to The Real World: Whiterun, the hottest reality show to hit Skyrim’s airwaves since Are You Smarter Than a Draugr?.The seven housemates fall largely into the same stereotypes depicted in MTV’s seminal reality show, with, of course, the added dimension of them being members of various races that populate Tamriel from the Elder Scrolls series. Episode one introduces us to six of the seven cast members: Rasha, an Argonian musician; Tsani, your average spoiled, pretty, popular girl who happens to also be a Khajiit; Dunnard, the typical a-hole jock; Jessica, the lesbian blacksmith; Voldar, a Breton who might be the creepiest person alive; and The Nooch, an Orc who refuses to speak in quiet tones, or not party. Here’s hoping that their shouting matches don’t involve the use of Thu’ums or else they’ll be in need of a new house.Right off the bat, the housemates begin developing relationships, be they good or bad. Will they all learn to coexist or will they team up to sic a dragon on the Nooch? Will there be tearful, Skooma-fueled confessions of love in the pool? Only time will tell. Be sure to look for new episodes of The Real World: Whiterun every week over on the Nerdist Channel.