She wields sabers on TV and styles shirts in real life. 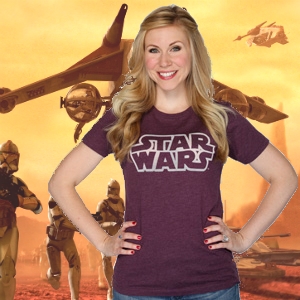 As the voice of Jedi Padawan Ahsoka Tano on Star Wars: The Clone Wars, Ashley Eckstein lives the fangirl fantasy. Running the online store Her Universe, she hopes to fulfill some of the wishes of others. We caught up with Ashley to talk gender differences, Ahsoka’s arc, Special Editions and even The Brady Bunch.Nerdist News: Do you ever get guys complaining that they want some of your designs in male sizes?Ashley Eckstein: We have, actually, and I take that as such a huge compliment! I’ve heard several people say, “Well, what about ‘His Universe’?”, and I say, okay, look on the convention floor. Go to San Diego Comic-Con, and pretty much the entire convention is “His Universe.”NN: Do you see any major differences between male and female fans?AE: Sometimes the male fans are really into the action and adventure and the battles, and we female fans become emotionally attached to the characters. You literally envision your relationships with these characters. I don’t even mean in a romantic way; you just view this character as if they’re another family member of yours.NN: Can you give us any hints about where The Clone Wars is going?AE: I just beg the fans who gave up on the show after the movie and season one to give it a chance now, because it’s a completely different show. Dave Filoni is a fan: he cares so much about the show and the storyline…Season two was when it really took off, and I think he’s turned it into what the fans wanted it to be all along.Catch up with our full Ashley Eckstein interview, then check out her wares at Her Universe.