McFarlane Toys has a Halo statue you’re going to want. 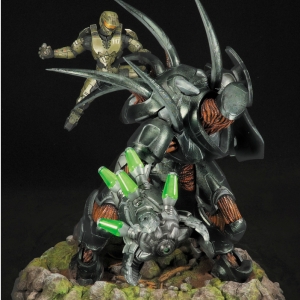 It’ll all be over soon. After tomorrow, all the waiting and hoping and worrying will come to a close; Yes, election day, but also Halo 4 will finally be released and the next evolution of combat will be at our controller-gripping fingertips. The game sees the return of Master Chief, Cortana and their further adventures in the far-reaches of sniperable space. Hopefully you’ve been keeping up with the excellent live-action prequel series, Halo 4: Forward Unto Dawn (if not, catch up on Machinima Prime) which just had its finale on Friday. If you watched the episode, you probably saw Todd McFarlane announce a new product: McFarlane Toys has created a limited-edition statue based on one of Forward Unto Dawn‘s most iconic scenes, Master Chief about to blow a Covenant hunter to a place they don’t respawn. Only 500 are being made and we’re giving one away!! Be sure to enter before November 11th, 2012 and go to our Facebook, Twitter and Google+ pages for more chances to re-spawn into the contest.We got very wrapped up in the trials and tribulations of the characters in Forward Unto Dawn and were suuuuuper excited to see a live-action version of John-117 (played by Daniel Cudmore, Colossus from the X-Men movies no less). If you felt the same, then a statue commemorating the cinema-quality beat down this hunter is about to get is exactly what you need on your shelf. This is the first-ever Halo resin statue and the highly detailed, hand painted statues retail for $225. The 360 degree frag fest can be pre-ordered here and is expected to ship in December. Each one is individually numbered and has a certificate of authenticity hand-signed by Todd McFarlane himself! You can get an even better look at the statue in our Halo 4 McFarlane statue image gallery. Try having a staring contest with Master Chief. We know who we’re betting on. With so much Halo stuff, it might be hard to keep everything straight. Fear not; we’re here to help. Here’s what we think you should  do: enter our giveaway, watch all of Forward Unto Dawn, go pick up your pre-order of Halo 4 at midnight (which we assume you were going to do anyway), kill Prometheans all night, down a Red Bull, go vote, and then pass out. After all that, you can still go to our Facebook, Twitter and Google+ pages for even more chances to win. You only have until Monday, November 11th, 2012 to do so or you may as well be overrun with Flood.