Give your dad something better than a loss at your hands. 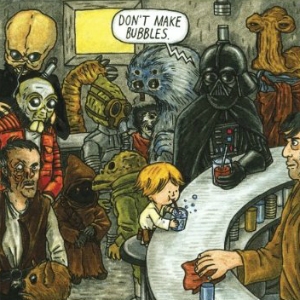 With Course of the Force only a few weeks away and Father’s Day coming this weekend, consider how cool it would have been if Luke Skywalker had accepted Darth Vader’s offer to “rule the galaxy as father and son.” Sure, there’s the whole downside of being evil and betraying your friends, but you also presumably get the keys to the Executor one day. And with Sith lightning at your fingertips, it’ll never need jumper cables. Luke took the more rebellious option, but we’re here to give you some stuff that’ll make both you and your dad feel like you rule. Enter our Vader’s Day giveaway now, and strike down some bonus chances at our Facebook, Twitter, and Google + pages before June 19th, 2012, to become more powerful.Our prize package includes a signed copy of the hilariously heartwarming Darth Vader & Son (with a personalized sketch of Boba Fett), The Star Wars Cookbook: Wookie Pies, Clone Scones and Other Galactic Goodies complete with three cookie-cutters, a $50 gift card from redbubble (who have some outstanding Vader tees here, here and here), a copy of the latest issue of Star Wars Insider featuring a Course of the Force update with our own Chris Hardwick (who personally autographed this magazine) and finally, father and son Ultimate FX lightsabers (Vader and Luke models) from Hasbro. With all that gear, both of you should be ready to run the Course of the Force relay come July.Putting food on the table, clothes on your back and good thoughts in your head… all primary duties of fatherhood, so isn’t about time you paid the old man back in kind? Even if he did wipe out your sister’s home planet that one time, he didn’t mean it. But you’ll mean it when you win this stuff for him, so take advantage of the extra chances at our Facebook, Twitter, and Google + pages. When the big guy chokes up this time, it won’t be from a Force attack.