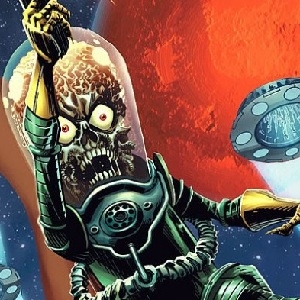 The Mars rover Curiosity found signs of life! It was scrawled on the side of one of the Red Planet’s many hills and reads, “Ack Ack!” Translators aren’t entirely sure what that means, but from the looks of the saucers, ray guns and veiny Martian heads, it’s definitely not good news. Mars Attacks, Topps’ gory, sexy and imaginative trading card line, debuted in 1962 and a cult hit was born. The original 55-card set told the horrific tale of Mars’ invasion of Earth and depicted scenes of battle, torture and all-out slaughter from both armies, which is exactly what a sci-fi obsessed ’60s kid would love. To celebrate a half-century of stylized depravity, we’re teaming up with Topps and Funko Toys to give away a prize package full of alien-approved swaggery. Enter here for your chance to win and be sure to hop over to our Facebook, Twitter and Google+ for even more chances.John F. Kennedy told America they’d get to the moon, but he never said nothin’ about having to fend off a fleet of flying saucers piloted by dome-headed green guys bent on vaporizing the entire human race. Maybe that was in an earlier draft of the speech. Kids would have eaten it up, though. When Mars Attacks hit the scene in ’62, it was a huge seller for Topps, but parents weren’t too pleased by the graphic violence and implied sexuality in the cards. In 2012, things are better the more violent and risque they are and so the 50th Anniversary Heritage trading cards are packed to the rafters with blood, goo and innuendo…as wholesome as apple pie.In addition to an entire unopened box of 2012 Mars Attacks trading card packs, the Grand Prize winner of our giveaway will take home three different toy interpretations of the iconic Martian Invaders and a nifty t-shirt. With all that, you could start your own squadron of the warmongering things, though we urge you to refrain from death ray usage and just play with them. If sci-fi carnage is as sweet to you as it is to us, you’ll definitely want to enter the giveaway and hit our Facebook, Twitter and Google+ pages for additional entries. If you don’t do so before October 31st, 2012 (Halloween, you know), the opportunity will turn to ash like your head once the Martians zap it. Fight back! Enter today!