Real Armageddon: The Men Who Drill into Asteroids 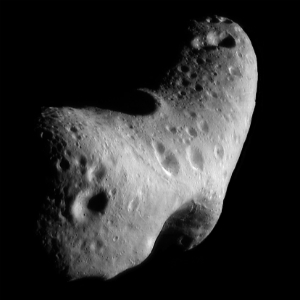 Unobtainium became a little more obtainable when Planetary Resources recently landed in the news to announce privately funded missions to asteroids, where space vehicles could mine for resources. No longer just a high-concept movie fantasy, this project has attracted a lot of high-profile backers, including the guy we first learned about unobtainium from, James Cameron. But the guy in charge is Planetary Resources’ President Chris Lewicki, and we decided to mine him for information. Like the asteroids he hopes to get to, he proved to be a bountiful resource.Nerdist: Tell us a little bit about Planetary Resources, for those of us who are fairly new to the concept.Chris Lewicki: Planetary Resources is a newly announced company whose intent is to develop the resources of space through mining asteroids.N: What kind of volume of material do you need to bring back to recoup all your costs?CL: Our initial aim and our primary plan is actually not to bring anything back to Earth. Really, the value of a lot of these materials is for their continued use in space. So on asteroids, particularly a type called the carbonaceous asteroid, many of them have as much as 20% of their weight in water. And water, as you know, is a really useful thing. It’s also very heavy. It costs currently over $20,000 to put a liter of water into deep space. So to be able to already find that water in space and just move it around from point to point, wherever we need it in space, is something that is extremely valuable. It’s good for humans, for drinking, for growing plants, for respiration – you can break the oxygen off and have something to breathe, and then hydrogen is the same kind of rocket fuel that’s used to fuel the space shuttle. So you can make fuel depots in space as well.N: If someone reading this article wanted to become involved, could they? Are you guys hiring?CL: Yes. We’re always looking for exceptional people who are passionate about the company’s mission to open up the resources of space and lower the cost of space exploration. We have a job application on our website – go to planetaryresources.com/careers. We’re not looking for people who just want a job; we’re looking for people with room to dedicate themselves to this goal, and to that end your resume and a cover letter are of course required, but we have a fun questionnaire to learn more about you, see what makes you tick and see if you’ll fit in with the culture here at the company.For more on Planetary Resources, including the lowdown on their relationship with Cameron, NASA and the military, launch yourself towards our full interview with Chris Lewicki, and dig in.