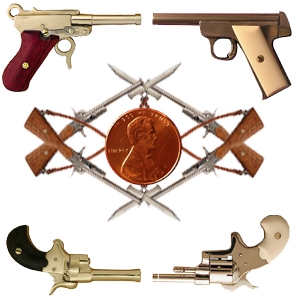 Let’s face it, toys aren’t always armed with the coolest of weapons. For every Sideshow or Hot Toys figure that comes with authentic styling, you’re bound to see a dozen or so characters from other lines with unwieldy projectile launchers that fire a neon orange chunk of plastic, using a spring so weak kids can’t even put their eyes out with it. Lame.But if money is no object and you want the absolute best, Bob Urso’s Piccolo Miniature Gunworks has you covered. We’re not entirely sure he had action figures in mind when designing his painstakingly crafted, miniature firearm replicas. That doesn’t change the fact that these are little lethal metal masterpieces. Added to the bargain? They’re the perfect scale to make us drool.So while these li’l shooters are a cool novelty for gun collectors, they can also accessorize your 12″ G.I. Joes in high shootin’ style. As long as you don’t mind the fact that they tend to run around $400 apiece, way more than the figure who could wield them. Honestly, though…a knuckle-duster gun that allows your toy to punch hard and shoot at the same time? Too awesome. Even your Stallone figures will be reaching for the sky.