Toys’n’girls: When you die, ask to come back as Brian McCarty 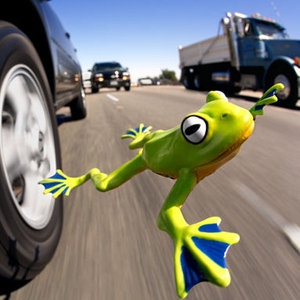 Brian McCarty has turned his passion for toy imagery into a globe-trotting art adventure that mixes high-brow and low-brow influences with equal glee. Forgive us for being suspicious, but the guy works with multi-nationals (Mattel) and cutting edge artistic concerns (KidRobot). Has this geek who made good held on to his roots? His latest book Art-Toys features amazing vinyl figures in unusual settings. Few can say they turned their childish things into more than a pastime. Yet Brian McCarty takes pictures of hot ladies, toys, and whatever his heart desires. Sound like a good gig?GCD: What inspired you to make art-toys an art project of your own?Brian McCarty: I’m not sure if there was ever a moment where I consciously decided to create these images as part of a specific project. Individual, stand-alone shots organically evolved into a series over the course of the last seven years. It started as collaborative play with friends and fellow artists. I’ve been a “toy photographer” since first seriously picking up a camera at age 12. Shooting art toys and working with the amazing community around them is part of the natural progression of my work.GCD: Lots of geeks took pictures of their toys when they were kids. You got started when you were 12?Brian: In truth, I started taking pictures of toys earlier, but not with any real purpose or determination. It took being exposed to an SLR for the first time to really make the connection. Macro isn’t a real possibility with a Kodak 110 camera. The toys that I first focused on were everything from 3 3/4″ GI Joe and Star Wars figures to random, vintage toys that were handed down from my mother’s friends. Through them, I ended up with a random collection of toys, cleaned out of old playrooms while sons were off at college. Since the figures were from a slightly older generation, they felt more raw and free from the prescribed identity that came with toys that had cartoon tie-ins. It was that much easier to make my own stories.GCD: What is the strangest place you’ve ever traveled to take a photograph?Brian: Considering that I’m in a specialty profession not known for peril, it probably shouldn’t be so hard to choose. I’ve been to some pretty wacky places and taken a more than a few stupid risks…mostly with my equipment. In recent memory is a shot that I did inside the Grand Teton National Park at a place called Two Oceans Lake. Aside from being completely infested with leeches, the lake also attracts a host of critters at night. A too-close-for-comfort moose was a little scary, but not as much as a bear that could be heard through the mist, but not seen.GCD: Do you re-touch the images digitally, or do you get your images mostly in-camera?Brian: All of the images are created in-camera, meaning that the photos capture an actual (albeit staged) moment in time. However, I’m too much of a perfectionist to not do some Photoshop polishing afterwards. Things like stray hairs and flawed paint decos are often fixed in post, and I also clean up tonal range and color reproduction. For all the purists out there, it’s the same stuff I used to do in the darkroom back in the pre-digital days, so I don’t feel it makes the photos any less “real.” I do find it funny though that some of the fakest looking photos are the ones I suffered for the most. “Moon Wanderers” is the resulting pic from the leech-filled lake adventure. A friend that works in the FX industry said she could recreate it in like an hour in Maya. Not the same, but probably less uncomfortable to create.GCD: Where do you find the lovely ladies that appear in your images? How do you pitch them on the idea?Brian: The lovely ladies come from all over. Some are friends, some are professional models. It just depends on what I’m shooting and what I need to get out of the shot. Perhaps strangely, I don’t usually have any trouble finding subjects to pose or understand what I’m hoping to capture. Yay for equally geeky, amazing women! Were it not for them, I’m not sure I could sell someone on climbing nude into a freezing cold pool for a toy photo.GCD: What are your geek proclivities?Brian: Well, aside from having an apartment that could give the Silver Spoons kid a run for his money, I also let my nerd flag fly through a weekly D&D game with an amazing group of guys. We’re each geek professionals in one form or another, and playing together is a hilarious treat. I’m usually the one that has to break character to do spit-takes or get composed after laughing so hard that I cry. GCD: Any guilty pop-cult pleasures you’d like to share?Brian: I feel dirty for having to tune into MTV to see it, but Warren the Ape is the absolute greatest show on TV right now! I saw Warren and his puppeteer alter-ego Dan Milano walking around Comic Con last week. It was a massive treat.GCD: We heard you’re working on a new book. Will you change your approach to your art in any way?Brian: The next book/body of work will likely be a bit of a departure, both in approach and content. I’m further developing concepts behind a war-toy study that I shot in the mid-90’s for a Zagreb exhibition in the immediate aftermath of the Croatian War of Independence. I’ll be using principles of play and art therapy to explore and document children’s experiences of war in the Middle East. It’s still going to involve shooting toys on location, but the intention and risks involved are quite different. Thus far, a bunch of humanitarian organizations have signed on in support, and it’s looking like I’m going to be able to make the project a reality. Fingers crossed anyway…Pick up your Art-Toys on Amazon and at quality booksellers now.