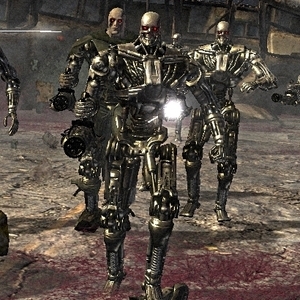 War is hell, but future war is bada$$. Such has been the lesson of the Terminator movies. Terminator Salvation gave us a better look at the human/machine conflict to come. Who knew Skynet would round up humans to serve as flesh-casings for killbots with inexplicably Austrian accents? (Click here to win sweet Terminator swag, and hit our Facebook for a bonus entry!)But it’s one thing to see the future war on-screen and another to actually live it. The Terminator Salvation arcade game, which we’re lucky to have here at GeekChicDaily HQ, plops you down right in the thick of the fight. Look for it in your local arcade…especially the 100″ SDX mod. As in the movie, there’s a wide variety of mechanical monsters seeking your demise – giant mechs, robotic eels, flying Hunter-Killers, and plenty of classic endoskeletons. A cool additional game design feature we dig: unlike other games that make you shoot outside the screen to reload, the huge machine guns that come attached to this bad boy get recharged by slamming the ammo magazine. Even if the baddies beat you down the first time, it’s addictive enough that, yeah…you’ll be back.To make you feel even more immersed in the battle for humanity we’re giving away two Hot Toys John Connor figures so realistic you’ll feel like he’s ready to back you up, whether you’re fighting real Terminators or your own internal anger robots. The detail on these figures is second to none; for a fun exercise, hit eBay and see what they’re going for these days. Also included: either The Art of Terminator Salvation, or a Terminator Salvation leather wallet.Click here to enter, and death to the machines!