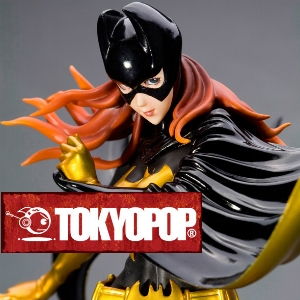 Asian pop culture has become part of the fabric of Americana over the last couple of decades, but the collapse of so many major retail outlets has threatened to starve it of metaphorical oxygen like the original Gojira. If there’s one thing we’ve learned from kaiju movies, it’s that you can’t keep a good monster phenomenon down. Enter TOKYOPOP, bringing you a voice by and for fans of trends and trinkets all across the Pacific Rim. Just in time for New York Comic Con, we’re launching an email newsletter powered by GeekChicDaily. Sign up for the TOKYOPOP Powered By GeekChicDaily newsletter and be entered to win an exclusive Kotobukiya black-variant Batgirl bishoujo statue. Godzilla-size your odds of winning with bonus blasts at GCD’s Facebook and Twitter, and TOKYOPOP’s Facebook and Twitter. Your chances at Bat end Oct 21, 2011.“GeekChicDaily and its daily, opt-in format provide the perfect opportunity to revive the original TOKYOPOP concept with a refreshed approach,” said TOKYOPOP founder Stu Levy. “The time is right for a well-balanced Asian pop culture publication with a West-looks-East perspective. We couldn’t be more thrilled to continue the TOKYOPOP brand and its contribution to pop culture with GeekChicDaily.”Contribute to your own knowledge of pop culture by signing up now and you might receive a contribution to your collection. The Kotobukiya black-variant Batgirl bishoujo statue is not yet available on these shores; one lucky subscriber will get it first. All you need to do is sign up for TOKYOPOP Powered By GeekChicDaily. Beget bonus Bat-entries at our Facebook and Twitter, and TOKYOPOP’s Facebook and Twitter. Kanpai!