Skyfall’s Sam Mendes: His World Is His Bond

The American Beauty director takes on a British badass. 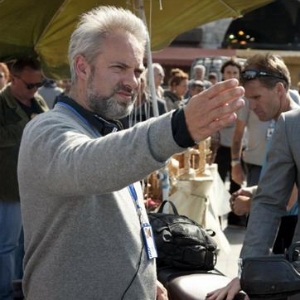 On the one hand, you have the director of movies like Jarhead and American Beauty which unearth the dysfunction beneath cultural archetypes. On the other, a franchise with strict expectations not exactly known for its auteurs. Yet Skyfall looks on track to be the biggest and best-liked Bond yet. Whether you have or have not seen it already, we hope our interview with Mendes about all things Bond will leave you stirred, not shaken.Nerdist News: A running theme throughout a lot of your work is the subversion of what you see on the outside. With the Bond movie there is obviously some subversion but there are also some definite expectations of what the movie holds. Was that a tricky balance to do?Sam Mendes: I think the balance is everything, isn’t it? It’s trying to find a way of providing the things you expect from a Bond movie, but at the same time making the familiar strange again, and a lot of it is I think trying to find a way to make Bond – to make an audience invest in Bond in some way, when really, for a long time, he was just a given. Certainly in the Roger Moore years he was an unchanging character. And here, you could argue that Bond is the person who changes the most in the story. It’s all about the balance. It’s a peculiar pressure to have, to know that you have to do certain things in a story, when the story hasn’t even been written yet. But at the end of the day I think you have to embrace that, and that’s the particular requirements of a movie like this, and it would be crazy to complain about it.NN: What was it about Bond that used to appeal to you the most, and has that changed now that you’ve taken this on?SM: It’s changed completely, yeah, because I was a 12 year old, 11 year old, when I saw Bond and it was the mystery of the adult world, and adult sex and glamorous locations, and great chases. I think those things are now provided by many other movies, as well as Bond, so I think it forces you to ask what’s the definition of Bond that isn’t all those things. To me what’s interesting about it is the complexity of him as a character and his enduring popularity, and why that should be. And in this movie there is a discussion about what’s the point of Bond, really, and what’s the point of the secret intelligence service, and what’s the point of MI6, and shouldn’t we all grow up and move on, you know? And Bond and M mount a counterargument, and by the end I think that probably you know which side I’m on.Do you expect us to talk? No, Mr. Bond, we expect you to…eh, just kidding. There’s much more to our talk with Sam Mendes, as we discuss locales, product placement and that uncomfortable interrogation scene with Javier Bardem. Skyfall is now playing in regular and IMAX theaters.

Scream On: The History of the Wilhelm Scream

Over 200 movies and still shrieking.more