Snag the Swag for Course of the Force

Running is its own reward…but you get cool stuff too. 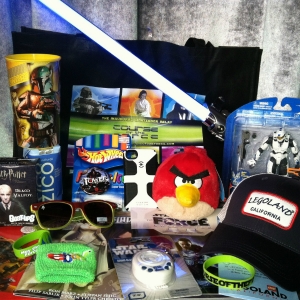 Course of the Force commences today in Santa Monica, but there are still slots available in this grand Jedi jog for the Make-A-Wish Foundation. Now that you’ve seen the origin video featuring Chris Hardwick, Robert Kirkman and disgruntled Ewoks, there’s just one more thing you need to know: the contents of the relay’s fully loaded swag bag! This ain’t no dark tree on Dagobah – it’s filled with way more than “only what you take with you.” Our personal army of Jawas knows how to gather up the stuff that’s worth something. Check out our gallery of the items in the haul, and be sure to check out your chance to win one even if you’re not running…Then check out the Hasbro Course of the Force Ultimate FX Lightsabers. Specially customized elegant weapons, for a more civilized participant, every runner will walk away with a blade of their very own. Once you’re done slicing things, build them up again with a pair of tickets to Legoland California. Stay fresh and fueled on the run itself with ZICO coconut water (drink it from an included Star Wars cup), Popchips, and Sunscape Lucasfilm sunglasses. Feed your head with a solid selection of comics and graphic novels from Dark Horse, IDW and Top Cow. Angry Birds plushes from Rovio will help fend off any egg thieves and a custom COTF Speck iPhone case will keep your comm link safe. That’s still not all. There are also Halo Anniversary Series 2 figures from McFarlane Toys, Legoland hats, Hallmark Jedi wristbands, Tower Chronicles buttons from Legendary Comics, and Hallmark Star Wars greeting cards, COTF stickers and wristbands, Hasbro Fighter Pods toys, Underground Toys Sound Blaster keychains and more. It’s like Life Day in July; a great shot at stuff you might say was one in a million. Are you ready to stay the Course?Want a chance to win all of this swag without running for it? Enter our Course of the Force Ted Giveaway! Seth MacFarlane’s swearing stuffed bear will be running, and we’d like you to score a swag bag by taking or creating a pic of our favorite foul-mouthed bear, either in motion on the run or at one of the COTF Conivals. He may have been Mark Wahlberg’s best friend onscreen, but he could be yours if you enter by July 14th, 2012.