Thanks for the Service: Our Fave Five Celebrity Veterans

In gratitude for great entertainment and great sacrifice. 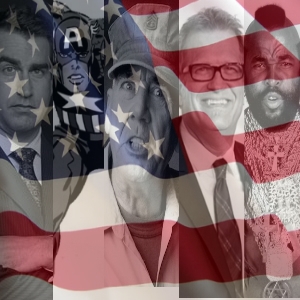 On a day-to-day basis, we may make jokes about whether or not Han shot first, but there’s nothing funny about being shot at. Those who willingly get in the line of fire on behalf of the rest of us are remembered today, and if you don’t happen to have made the acquaintance of any veterans personally, well…here are five we’re pretty sure you do know and respect.

Rob Riggle – If you weren’t aware of Rob Riggle’s military history then where the Foxtrot Unicorn Charlie Kilo have you been? The Daily Show veteran is also a former Marine. So even if his joke falls flat, it’s in your best interest to laugh. As he told us in a recent interview, his training helps inform the blustery, incompetent characters he’s known for playing, in that “I work against everything I know to be right.”

Mr. T – In addition to having served in the Military Police, the erstwhile Laurence Tureaud has also worked as a bouncer and a bodyguard, been offered contracts as a hitman, maintained a career in movies and TV for over three decades as the exact same character in everything, and found a way to stop the passage of time. Either that or he’s a Highlander (and his accent would suggest not) – how else to explain that he still looks the same now as he used to on The A-Team? Maybe the natural weightlifting of all those heavy gold chains on his shoulders gave him the best workout ever.

Drew Carey – That haircut wasn’t just a stylistic choice (though the glasses were, most of the time). The funnyman who brought free-form improv to American prime time was a Marine long before showing most of the country where to find Cleveland on a map, hosting The Price is Right, and being the first sitcom star to be inducted into the WWE Hall of Fame. And the spirit of brotherhood carried over to his comedy career, where he helped launch pals like Wayne Brady and Craig Ferguson. As Mimi and Farmer Hoggett might team up to say: “That’ll do, pig. That’ll do.”

R. Lee Ermey – How badass is R. Lee Ermey? Stanley Kubrick only planned on using the former Marine as a technical consultant for Full Metal Jacket, but upon seeing and hearing him in action, he not only cast the guy but actually allowed him to improvise his own lines. Or how about this: he owns his own personal jeep with a 30 caliber machine gun attached. When anybody even utters the phrase “drill sergeant,” chances are you think of him. He’s also been in video games, cartoons, and “no talking” ads for the Alamo Drafthouse. When Chuck Norris says his prayers, we suspect it’s R. Lee Ermey who answers.

Jack Kirby – Did you enjoy The Avengers? Then thank this man. Stan Lee has had his hands shaken and praises sung enough times that we’re pretty sure he feels loved by now, but Kirby, who cocreated many of Marvel’s mightiest, can claim credit for Captain America (along with Joe Simon). While his creative battles with Marvel are well-known, it’s a tale less-told that he landed in Omaha Beach not long after D-Day, and used his artistic talents to draw recon maps for the army. Nearly losing his limbs to frostbite, he was honorably discharged having earned a Bronze Battle Star. Sadly, he died in 1994, but his work lives on forever.