Buy the Blu-ray; behold the Batmobiles. 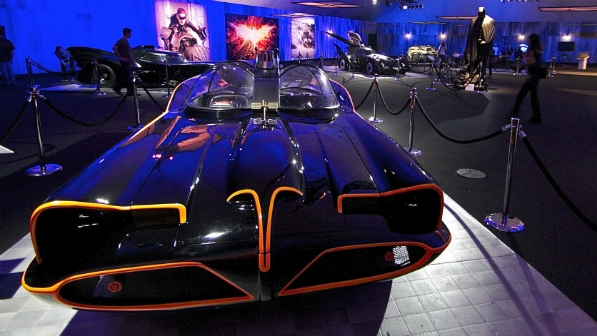 Even as online rumors begin breathlessly swirling about how they’ll reboot Batman next, let’s not forget that the current version still packs a potent Batpunch, and today you’ll finally get to own the last part of the Christopher Nolan Dark Knight trilogy on Blu-ray or DVD (short on Bat-bucks right now? Win all three in our giant gift-guide giveaway). Simultaneously, in downtown Los Angeles, the Batmobiles from every movie are coming to the final stop of their national promotional tour in style, as part of a free exhibition called The Dark Knight Legend. Along with the cars – which range from the Adam West version to Bane’s camo-tumbler –  every major costume from the Nolan films is on display, as is a collection of Batman-inspired artworks. Clever tricks of lighting and perspective make it look as though many of the paintings are floating, and also cheat the scale of the mannequins representing the actors. Accounting for differences in base size, for instance, it becomes clearer that Tom Hardy isn’t a whole lot larger than Heath Ledger, and Marion Cotillard was likely the tallest cast member of all (though Ken Watanabe’s costume is in a seated pose, so you can’t rule him out).George Barris, who bought the Adam West base car for a dollar back in the day and is now auctioning it off, remembers his time designing it. “We only had a budget of $15,000 and 15 days. If you’ll notice, my squirters in the front, in the grill, are lawn sprinklers.” He expects the sale to net much more, saying, “If Marilyn Monroe’s white dress could go for four or five odd million, the number one car in the world should be able to exceed that.” One of the key things to any Batmobile, he stresses, is that “it had to be an actor.” The car itself is a movie star.Up close, character details pop up that may not have been as noticeable on film. The windows of the Tumbler, for instance, form a face. “It’s got a character to it; a bat-like look,” says Andy Smith, who built it. The reason George Clooney’s vehicle went roofless? “The whole car’s a cape, that’s why everything’s drawn out,” builder Charley Zurian tells us. “You can see the body sides – that’s the front, the fingers, and then the wings – if he’s going at speed, the cape should be flailing out behind him.” Tim Flattery, who designed Val Kilmer’s H. R. Giger-inspired ride notes that Giger himself was actually commissioned to provide some sketches, but “they just didn’t translate to the film.”Though Smith noted of the Tumbler that “it does what you see it do,” we did get him to admit that the Batpod coming out of it was done with special effects, although, “They actually built a rig to bring the bike out of the front of the car, designed it and had it worked out. It didn’t ride away, of course, but it did move and did bring the bike out the front. But they decided to do it digitally, so I don’t think that ever got used.” As for Batman Returns‘ Batmissile transformation, however, Flattery says, “we built that specifically, and the transformation was done on miniature. You gotta build ’em specifically or the transformation would never work – although I bet you Andy could figure out how to do it.”The one thing all the designers agreed was sacred and mandatory is the flame-spitting exhaust, so we had to ask George Barris what his inspiration was, originally. “Actually, it’s a jet tube,” he says. “We were supposed to have a jet engine in here, and to have it work as a jet we had the tunnel come out from it, like a jet, and with the budget that we had, I used my five-gallon paint can and then I put ribs on it to give it the effect of a jet. I had a little electric fan and a certain fuel that went through a tunnel, and the flame would hit the little air blower, and it would push it right out the tube.”Also on hand for the exhibition opening was comedian Jeff Dunham, who owns the (now street-legal) Keaton Batmobile in the show. Initially an Adam West loyalist, he describes his first geek-panic response to the 1989 movie. “It was like, this isn’t gonna be right; it’s gotta be way overacted! This is much too subtle! But of course, you learn what’s really great when you watch it.” Indeed – great enough that it ultimately inspired his wedding cake. Since Dunham’s known for ventriloquism, we had to ask: would he be interested in bringing Scarface to life in a future Bat-movie? “Could I actually be the bad guy?” he muses. “Yes, I could. I oughta bring that to Christopher. If they’re gonna bring this franchise back in 2016, then what the hell.”The Dark Knight Rises Blu-ray is on sale now, featuring a documentary on all the Batmobiles, and if that doesn’t sate your love of all things that drive you batty, Insight Editions has a massive tome for sale entitled Batmobile: The Complete History. The Dark Knight Legend exhibit runs through Dec. 14th at L.A. Live, 12 p.m.-9 p.m. Free admission.