As his Nerdist Channel show debuts, we look at his best stuff. 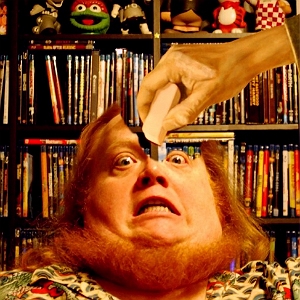 Ain’t It Cool? Movie webmeister Harry Knowles’ new Nerdist Channel show, launching today, asks the question to which you’ll be responding emphatically in the affirmative once you see some of the things he’s going to show you in his basement. Many will be featured down the line, but in advance of that we got the O.G. “Headgeek” to name his five favorite items from the collection (check out bonus images at our Pinterest page).

“It’s the smoke bomb that Robert Armstrong throws that knocks King Kong out. Without that smoke bomb, they never would have gotten Kong off the island. Its prior owner was Forrest J. Ackerman. I first got to hold this prop when I was 17 years old, and I swore to myself that I would one day possess it. After Lord of the Rings opened, Fran Walsh contacted me to see if I knew anything cool she could get Peter [Jackson] as a gift, and I sort of negotiated the sale between Forrest and Fran of the great stop-motion props from all his Kong memorabilia. I negotiated in advance that I would get the Kong bomb for my part in setting up the sale; I knew it was the only way I’d ever be able to have one. Peter has the other two, but mine was the one that was actually thrown at King Kong, because it’s got the damage on it – the others are in perfect condition.”

“The Cronos device that I have isn’t one of the ones that was used in the film; all those were actually stolen off the set of Guillermo del Toro’s movie, because they were all cast of real gold and they got melted down and sold on the black market. After the film was finished, Guillermo had ten Cronos devices made, and he decided that when, at any point in his life, he met someone that he wished could live forever, he would give one of his Cronos devices to them. And I love that in the movie, this device grants you everlasting life and converts you into a vampire that will lick blood off the floor of a bathroom, but more than anything it symbolizes the friendship that I’ve had ever since I first met Guillermo.”

“In the silent era, when Max Fleischer did Koko the Clown ‘Out of the Inkwell,’ you would always see Fleischer somehow interact with the animated characters, and the way he did that was he took a photograph of his hand and then painted over it to give it higher contrast lines, because with the type of film stock that they were using in those days, a photo of a photo wouldn’t register that well. Then he would animate, one frame at a time, that hand doing something, and in this case, that hand is holding an eraser. Now, once I introduce this particular prop [pictured] on the show, it’s gonna become a character that will erase people out of my basement if they ever offend me. So I’m actually going to make use of something that was created 100 years ago in a special-effects format.”

“Rorschach’s mask from Zack Snyder’s Watchmen – it’s actually the one you see him wearing when he’s first introduced at the very start of the film, looking up at the sky. As a comic geek who really really loves Watchmen, the idea that I have it is kind of wonderful.”

“From the original Texas Chain Saw Massacre, I have the armchair that Marilyn Burns was tied to at the dinner-table scene, that had two human arms underneath her arms. In terms of growing up in Austin, Texas, where it has become the legendary film of the town I live in, it’s kinda super-awesome.”Ain’t It Cool with Harry Knowles debuts today on the Nerdist Channel.