How-to heroism, by the book. 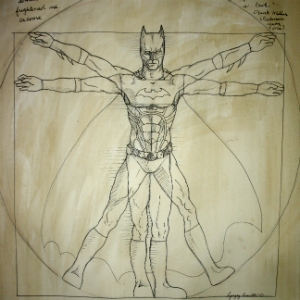 Wanna be a superhero? You could try copying what characters do in comic books, but we don’t advise it. In real-life, radiation gives you cancer, rocketships from exploding planets don’t always land on inhabited worlds and guys who dress in scary costumes get unmasked in court. You’ve got to prepare better than that. And we’ve found a terrific trio of tomes to help. (Note: book titles provided for entertainment purposes only. We are not responsible if you put on a cape, jump off a roof and break your back.)

Machine Head – With E. Paul Zehr’s Inventing Iron Man: the Possibility of a Human Machine, you can get a head-start on concepts that would make even Tony Stark’s head spin (more so than usual after an eight-martini bender, we mean). The real-world possibilities of a cyber-suit include neuroscience and human-computer fusion. So you can be Iron Man without ruining your heart and liver…or Robocop without having your limbs shot off first.

Attacking the Clones – How to Defeat Your Own Clone isn’t particularly practical right now, unless you’re Bridget Fonda, and Jennifer Jason Leigh just became your new roommate. But once the future comes knocking, and multiple Arnold Schwarzeneggers are running around after each other, you’ll be glad you prepared in advance.

Up to Bat, Man – In theory, Bruce Wayne is the superhero who’s most plausible in our world. No powers, no magic: just a phenomenally wealthy human being in great shape. The Batman Files gives all the details on his path to the top; unfortunately, it would seem that his workout is not humanly possible. Now you know why Michael Keaton never followed it.(Vitruvian Batman by ~singsilver on deviantArt)