Volume 7 delivers on DVD and Blu-ray on Tuesday! 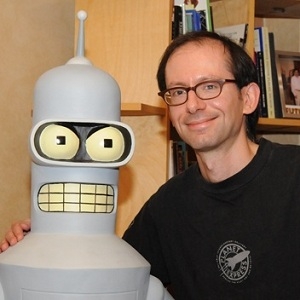 It’s not often that a series can be off the air for longer than it was on the air and then come back as strong as ever, with only minor changes. This is the case, however, for Comedy Central’s Futurama, which used to be FOX’s Futurama. One of the people responsible for the show since day one is David X. Cohen, the developer, executive producer, and head writer. He was kind enough to talk to us (the full transcript of which is over at Nerdist.com) about the way the show has changed, science he finds interesting, topical humor and cut musical numbers.Nerdist News: Futurama is going strong in its second season after being “Rebirthed.” How has the show changed from last year to this year?David X. Cohen: Ah, good question. The weirdest thing about this season, for me, is that there was not a lot of drama coming back from last season. It’s a situation we are not used to at all here at Futurama. You know, we were on last year and they just said, “We want some more,” and then we were on this year. We don’t even know how to deal with that situation! So, the lack of chaos and people quitting and going off to find work while we’re semi-cancelled has been very surreal for us. So, that’s been the oddest thing about this new season. We kinda kept going, we got to keep all of our writers and animators. It was an unheard of smooth transition from season to season for us.NN: Do you have any favorite characters to write, or ones you like writing more than other ones?DXC: It’s boring to say Bender, but it is really fun to write for Bender, in the same way that it’s fun to write for Homer. The character who does what he wants to do at any moment and he doesn’t just have fantasies; the second he thinks of something he wants to do he’s doing it and says what he wants to say, that’s your Homer and Bender and they’re always fun to write for. I always want to give a more creative answer like, “Hypnotoad!” or “Roberto!” They’re great, but it’s hard to do an A story, a main story, about those characters. Of the main characters, I think still Bender. Many of the episodes which are the best episodes are NOT Bender-centric episodes, like a lot of the Fry/Leela ones which I think are among our bests and our fan favorites. It’s always this trade-off where you do a higher degree of difficulty and try to get that emotion in there, which often works better with Fry and Leela or Fry remembering his past, to have a big pay off. So, you know, easy and best are not always the same and fun and good-outcome are not necessarily the same.For the rest of our interview with the Futurama head honcho, head over to Nerdist.com. The Volume 7 Blu-ray and DVD are out on Tuesday, December 11.

Kick Out the Nerd Jams and Prepare for Summer