They Ain’t Afraid of No Ghosts!

Diminutive Ghostbusters: the next best thing to actually having Bill Murray in your pocket 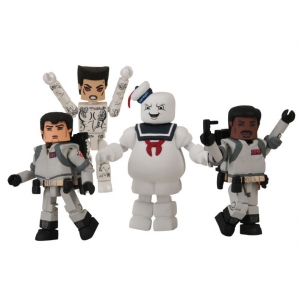 Besides the actual movie itself, the greatest cultural artifact spawned by Ghostbusters is… well, it’s Ray Parker Jr.’s music video for the theme song. (A neon bedroom, a ghost-like Parker, cameos from the likes of Chevy Chase, John Candy and Joe Piscapo—come on, watch it again for the first time.)

But the second greatest Ghostbusters artifact is inarguably its line of minimates. The Series 1 Box Set already gifted collectors with boxy toy versions of Peter, Egon, a bedraggled Gatekeeper and a terror dog. Toys”R”Us exclusives gave us such gems as an exploding Stay Puft Marshmallow Man and “Gooey Ray.” Now the new Series 2 Box Set, which hits streets tomorrow, brings everything home with an unexploded Stay Puft, Ray, Winston and the prehistoric bitch herself, Gozer the Gozerian. The figurines look awesome and all attached proton packs, neutrino wands and ghost traps are, of course, removable.

If bustin’ makes you feel really good, you can display the toys in front of print-out-able backdrops of the firehouse headquarters, haunted library and rooftop Stay Puft-apalooza created by the website Millionaire Playboy. They’ll make your toy shelf look good. Although sadly, not quite as good as that Ray Parker Jr. video.