The world may have ended, but the excitement hasn’t. 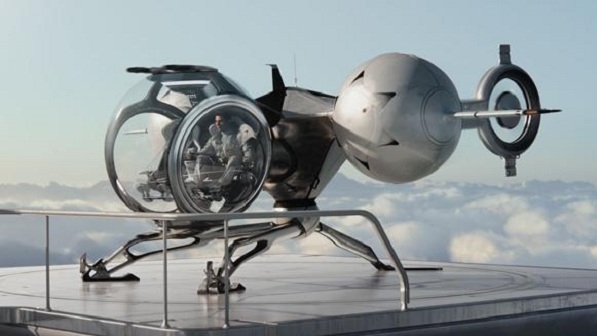 Depictions of post-apocalyptic Earth rarely look as welcoming as they do in director Joseph Kosinski’s new film, Oblivion, which hits theaters today. It’s only Kosinski’s second film after 2010’s visually-stunning TRON: Legacy. In Oblivion, Tom Cruise plays one of two people left on Earth after an alien invasion, and subsequent nuclear annihilation, forced every human to flee for Saturn’s moon, Titan. His job is to repair the drones that protect the huge machines pumping water from the oceans to take to Titan, and usually he has to shoot up some Scavs, remnants of the invasion that the alien race left behind. It’s decent work if you can get it. The problem arises when an old United States spaceship (A U.S.S.? Wrong franchise.) crash lands and a cryogenically-frozen astronaut just happens to be the woman Tom’s been dreaming about. Cue dramatic music…now. Every good science fiction movie needs some sweet vehicles and Oblivion has a doozy: a sleek little number aptly named “The Bubble Ship,” which looks like a helicopter if instead of propellers, it had energy-emitting balls. We’re hoping this will be another case where a vehicle from a Joseph Kosinski movie gets turned into a real thing. That’s right, somebody made a version of the light cycles in TRON: Legacy that actually runs on efficient battery power. Granted, a ship that flies via energy propulsion is going to be a bit harder to replicate than a motorcycle with lights on it, but we have faith someone with a PhD and a dream will be able to do it.Joining Mr. Cruise in the film are Morgan Freeman, Olga Kurylenko, Andrea Riseborough and Game of Thrones‘ Nikolaj Coster-Waldau, which leads us to our next question. Do Titanians not want attractive people on the moons of Jupiter?! For a more in depth review of Oblivion and an interview with director Joseph Kosinski, head over to Nerdist.com, and start your petition now to make Bubble Ships a real thing. Seriously man, we need that flying car.