Welcome to the New Old-School 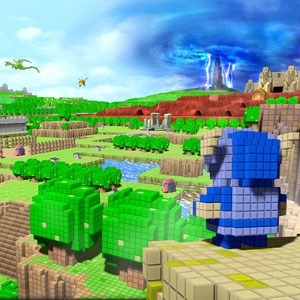 If you’re of the mind that video games—like time-travel movies, two-pronged guitars and dudes named Corey—peaked sometime in the mid- to late-1980s, then don’t miss out on 3D Dot Game Heroes. Available today on PSN and PSP, the brand new RPG platformer is the ultimate tribute to (and parody of) your favorite 8-bit adventures of yore.Imagine Link’s original top-down quest in the first Legend of Zelda, flip the view down into third person and bring every individual pixel into the third dimension— that’s the basic premise of 3D Dot Game Heroes. Everything from the blocky visuals to the bleeps and bloops to the musical score is dripping in 8-bit nostalgia. What’s more, the game is steeped in endless, not-so subtle nods to its forbearers. Exiting your first dungeon, for example, initiates a cut scene jacked straight out of the first Final Fantasy. The elderly inventor you encounter in the first village? We think he bears more than just a passing resemblance to Mega Man’s Dr. Light. How many old-school references can you spot?Even the plot is a classic one. After all, 3D Dot Game Heroes is the tale of a mighty warrior (that’d be you) who must restore peace to the Kingdom of Dotnia. How? By finding the princess, of course.